A Message from the Philippine Consulate
Fr Michael Guckian OMI 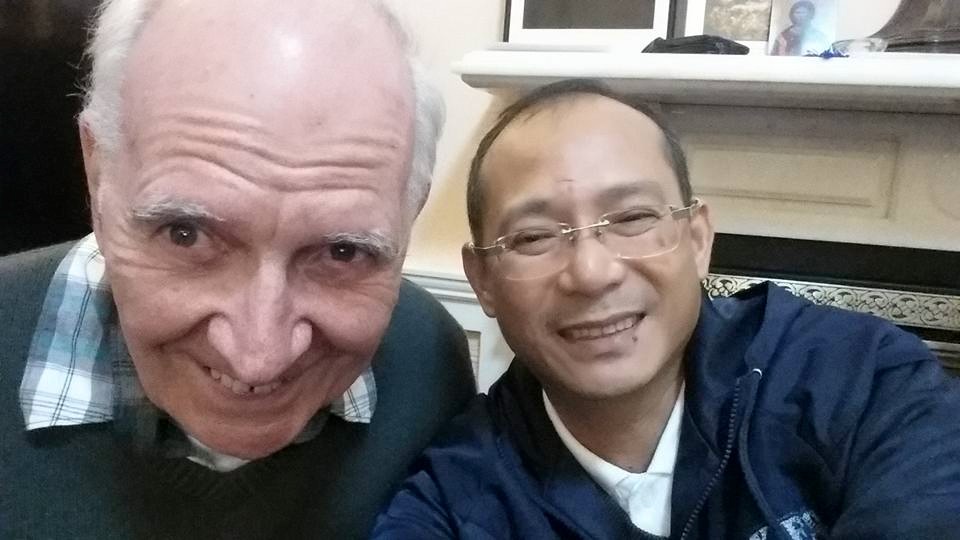 Fr Mike with Fr Dennis Guirnalda Gui OMI, a former student, who visited the Community in Inchicore in 2015

The funeral of the late Fr Michael Guckian OMI

The Philippine Consulate Dublin was saddened to hear the news of the tragic death of Fr Michael Guckian on May 11th 2019 caused by a hit-and-run crash. Fr Guckian was originally from Co Roscommon where he lived with the Oblates of Mary Immaculate Order at Mary Immaculate Parish in Inchicore, Dublin since 1999. Prior to this, he spent 33 years in the Philippines, many of which he spent in Southern Philippines in Cotabato, Tawi-Tawi and Sulu.

During his time in the Philippines, Fr Guckian braved what was, at that time, one of the most dangerous locations in the Philippines due to fanatical Muslim terrorist activities in an area with the largest Muslim population in the country. Later, Fr Guckian went on to head the Oblates Retreat of Mary Immaculate Retreat Home in Quezon City, Philippines.

Philippine Ambassador to the UK and Ireland H. E. Mr. Antonio M. Lagdameo relayed his sympathies to the family and friends of Fr Guckian through Philippine Honorary Consul to Ireland Raymond C. Garrett. Ambassador Lagdameo would like to acknowledge the many years of work Fr Guckian had given in the Philippines.

On May 13, Consul Garrett visited the Oblates Order at Mary Immaculate Parish in Inchicore, Dublin to express his condolences and the condolences of Ambassador Lagdameo, for the sudden and tragic loss of Fr Guckian.

Consul Garrett will attend the Mass for Fr Guckian on Friday 17th May at Mary Immaculate Church. He is also calling on the Filipino and Irish Community in Ireland to pray for the soul of Fr Guckian and if possible attend the various services.

Funeral Arrangements for Fr Guckian are as follows:

Reposing at the home of his nephew Gerard Guckian (Drumboylan) on Wednesday 15th May from 1 o’clock until 5 o’clock with removal to St. Patrick’s Church, Drumboylan, arriving at 7 o’clock.

Requiem Mass on Thursday 16th May at 12 o’clock with burial afterwards in Kiltoghert Cemetery.

Mass will be offered at 7 pm on Friday 17th May in the Oblate Church of Mary Immaculate, Inchicore.

You are welcome to join us for morning prayer with Alexa Davies...

Join Fr Irvin Morastil for night prayer from the Oblate Parish of...

“He has come that we may have life and have it in...

Oblate Novena for Vocations: May 21st-29th