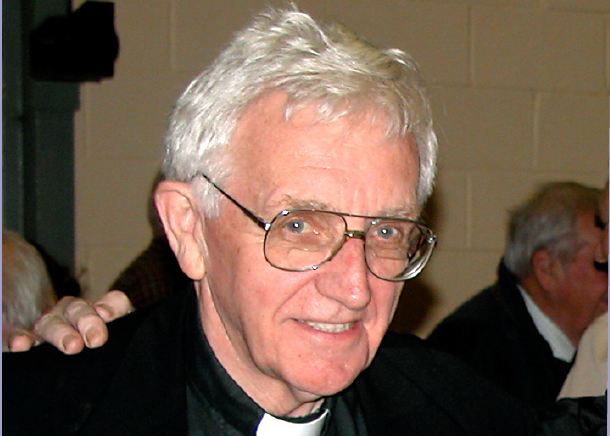 The Dillon family soon moved to Inchicore, Dublin where his father was the local family doctor. Their home was next door to the Oblate grounds on Tyrconnell Road.

After primary education at Scoil Mhuire Gan Smal, Ciarán went to Belcamp College on the City’s then rural Northside where he completed his Leaving Certificate in 1947. A few months later he entered the Oblate novitiate at Ardagh, Co. Limerick — a path also taken 3 years later by his younger brother, Paschal. Years of study followed at UCD and the Oblate house of studies at Piltown, Co. Kilkenny. He was ordained priest at Clonliffe College a few days before Christmas 1954.

After ordination Ciarán was assigned to the US Western Province, where he was above all a dedicated and humble pastor, from 1955 until he retired in 2014.

Over the course of his long and varied Oblate ministry, he served communities on America’s western seaboard, from California northwards to Washington State. He was also for many years his Province’s talented and capable treasurer.

As Chaplain for 10 years at the busy Port of Seattle, he met and helped sailors who came to the Catholic Seamen’s Club, but he also went on board the ships to meet those in need of pastoral care, and to pleaded on behalf of seafarers in trouble. When a Liberian ship called ‘Five Bays’ was held up in Port for several weeks because 17 of its crew (all Filipino) went on strike, protesting the dirty and dangerous conditions on board — limited food, no hot water, and 2-3 inches of oily water in the crew cabins, not to mention rust, rats, and cockroaches — Ciaran was one of the few allowed to board the “hell ship,” as it was called. He celebrated Mass for the crew, and worked out an agreement with the captain on behalf of the striking sailors, to ensure that they would not be victimised. Through his help and that of other advocates, the strikers were released from the ‘Five Bays’ and flown home to the Philippines.

For the last 20 years of his active ministry, Fr Ciaran was pastor at St Rose Parish, Crockett, a small town to the north of San Francisco. This was work he loved among people he came to know and love. He too, he developed a love for vegetable gardening. Here he had the space and time to grow and cook his own food, to get back to living simply and in harmony with nature.

At a parish party to mark his retirement, a community spokesperson spoke of him as “a great source of comfort and understanding to the people”. “He is a humble man of unwavering Christian faith.”

Father Dillon’s retirement also coincided with the Missionary Oblates of Mary Immaculate leaving St Rose Parish where they had served since 1955.

For Ciaran too, it was time to consider moving back home to Ireland. In 2015, he joined the Oblate community next door to the family home where grew up.

Oraison prayer with Friends of St. Eugene – Birmingham  To begin at...

The Young At Heart Club celebrates Chinese New Year, the festival which...

The Annual Novena to Our Lady of Lourdes takes place in the...