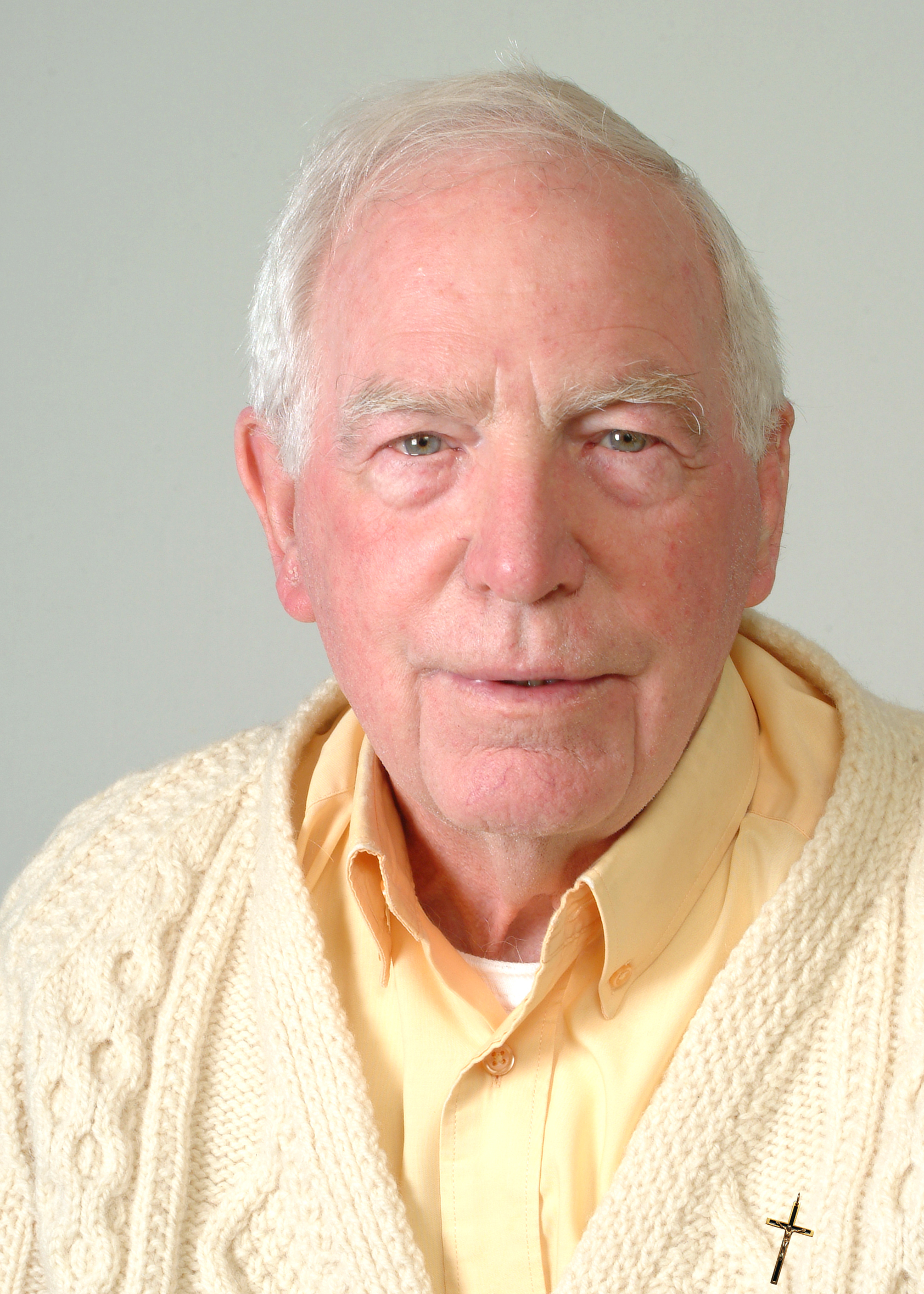 Fr Eamon O’Reilly was a missionary in South Africa for 48 years, from 1960 until he retired home to Ireland in 2008.

He witnessed enormous social and political upheaval as Apartheid collapsed and the new Republic of South Africa was born. He saw in Soweto the beginnings of the Uprising that would ignite the country. He was right there, and had the extraordinarily challenging role of pastor to communities caught up in this often angry, violent and brutal struggle.

Born at Gartbratten, Milltown, Belturbet, Co. Cavan, in 1932, Eamon was just 2 years old when his father and little sister died within days of each other.

He began secondary education as a day-student at St Patrick’s College, Cavan, but the daily 16-mile round-trip by bike was too much, particularly in winter cold and rain. After two years he moved to Belcamp College, Dublin where he completed his Leaving Certificate in 1953.

It was there that Eamon first met Oblates. He was impressed by the missionary witness of priests like Gerry Smits and P.J. Ryan, and by occasional presentations from young Oblates home on holidays from the missions — so much so that he decided to test his Oblate vocation.

He entered the Oblate Novitiate at Ardagh, Co. Limerick in September 1953. Six years later, preparatory studies at scholasticates in Dublin and Co. Kilkenny completed, he was ordained priest at Piltown, Co. Kilkenny on 20 September 1959.

Determined to avoid cold Canadian winters, he expressed a preference for missions in ‘the Philippines or anywhere in the Southern Hemisphere’. He and his friends, Joe Leathem and Jim Hyland, were among the nine young Oblates sent to the three South African Oblate Provinces that year.

He never forgot the excitement of anticipation as they set out into the unknown, young, enthusiastic, enjoying each new experience, eager for the missionary challenges that lay ahead. He remembered, too, the warm welcome to Africa they received from local Oblates when they disembarked in Durban.

Preparations for missionary life in Africa began in the tiny independent Kingdom of Lesotho, where they learned Sesotho, a widely spoken African language, and also studied and experienced the culture and traditions of the people.

Eamon’s first appointment, to Our Lady of Lourdes Mission, Village Main, Johannesburg, included chaplaincy to nearby gold mines and to five mine hospitals, always full of men with work related injuries. At that time, up to 400,000 gold miners from many countries worked in the region.

Domestic workers were another priority; he visited them at their work places, and celebrated a special Mass for them on Sunday afternoons when they were off work. This was their opportunity to meet and socialise, sing in harmony, enjoy community, camaraderie, and a break from the drudgery of their work.

The pastor, Offaly-born Tom Kearns OMI, encouraged the miners, most of whom worked and lived in sub-human conditions, to keep alive their cultures and traditions, their music — their spirit. He used every opportunity to organise festivals and music sessions, often joining in himself with his accordion — always with the aim of helping men, separated from families, homelands and roots, to build peaceful communities where they could learn to cherish each other’s cultures and traditions.

Tom’s advice to Eamon was, ‘think of your day-off as the most important day of your week’. He spent the weekly day-off with Joe Leathem and Jim Hyland on the tennis court and, later, the golf course. In the difficult years to come he would appreciate the wisdom of that advice. Tom was an excellent mentor to the younger Oblates, and Eamon would remember those first 5 years as ‘busy, exhilarating’ and a good learning experience.

He was pastor at St Gemma’s Mission when Oblate Superior General, Fr Léo Deschátelets visited the Mission in 1967. Poverty was rife in this African township; dwellings were woefully inadequate in the bitterly cold winters; people were cold and in need of food and clothing. With help from a welfare society, the Mission distributed food and clothing during the winter. A classmate of Eamon, by then on the General Administration staff, remembered Fr Deschátelets speaking of his admiration for Eamon’s missionary zeal and his presence and work with these very poor people.

Soon afterwards, Eamon was appointed to St Pius X Mission, Mofolo, a township within Soweto, where he would go on to serve as pastor to various communities for 21 years. When a delegation asked him, on his arrival, to build a church for them, his answer was, ‘No, I won’t build it; let’s build it together’. He insisted that the new Parish Council take the lead in this community project. The new church was opened (free of debt!) 7 years later. These were years of working together, not just to build a church but, in the process, to build a humane and united Christian community.

Fundraising ventures included a weekly ‘cinema’ that attracted huge audiences of mainly young people, and festivals and small business initiatives. Thanks to these activities, Eamon came to know many of the children and young people of Soweto — a great blessing when the Uprising erupted, changing all their lives forever.

June 16th 1976 was the day when students in Soweto went on strike to protest against a government policy to teach all subjects through Afrikaans. Eamon met the marchers in the morning and spoke with the leaders, many of whom he knew.

They made a path for him through their growing numbers. A few hours later the mood changed when a boy on the march was shot dead by police. The rioting and mayhem that followed went on for days; many students died; and Soweto became extremely dangerous for white people.

The years of violent struggle that followed called on all Eamon’s reserves of faith, hope, and love for the people, and his gifts of patience, good judgment and courage. Funerals of students killed by security forces were always traumatic and dangerous.

Sometimes family and students would ask him to accompany the remains from the house to the church. ‘I was the only white person among the thousands of mourners; I never felt any danger except from police teargas.’

After 13 years at Mofolo mission, he was asked to take on two other missions in Soweto, Meadowlands and Dobsonville. Here too, patience, tact and good judgment were required to help communities negotiate deep internal conflicts and cope with escalating violence on the streets. On a few occasions he found himself the powerless witness to acts of indescribable barbarity as rough justice was meted out to erring community members.

By 1984, he knew that he needed a break from the stress of Soweto; he felt he had done all that he could. His new appointment was to St Anthony’s Parish, Randfontein, where most of the people were of Portuguese descent. This was a great relief from the violence, killings and chaos he had lived with in Soweto.

However, four years later, he was back in Soweto, this time to take charge at Regina Mundi Church and Mission. This enormous church (capacity of about 5,000) became an icon of resistance to Apartheid. It was used for Church gatherings, politically-charged Funerals, and political meetings. Because of its media profile around the world, the security authorities gave it special attention. From 1987 onwards, the period of National Emergency, confrontation happened regularly at the church. At the end of a rally organised by the South African Council of churches, for example, police used rubber bullets and teargas on the participants.

Through all the confrontations, intimidation and bullying, Eamon was responsible for running the Mission, the weekly catechism classes for young people, adult faith instruction and preparation for the sacraments. He and co-workers, Br Enoch Makhwelo OMI and Sr Declan (Mercy Sister) tried to maintain as normal and peaceful an ambience as possible for pastoral work and celebrations. He was the public face of a church constantly in the news.

But the stress had become too much, his health was failing, nightmares were dominating his hours of sleep; so, after 5 years, he asked for a change. This was immediately granted, bringing his extraordinary 21 years of pastoral leadership in Soweto to a close. Away from the stress, he soon recovered and, after a 3-month rest, was back in Johannesburg as pastor at the Italian parish, Mater Dolorosa, in Kensington.

In 1996, the Provincial asked him to develop and manage a failing Retreat and Conference Centre at Germiston. He turned the Centre into an excellent and much appreciated resource that was used by many groups. Not only that, he also managed to set it up on a sound financial basis with a good business plan. He discovered his talent for imaginative administration, and he relished the challenge. Not surprisingly, he was very disappointed when his Province failed to appreciate the Centre’s potential as a valuable and sustainable asset for mission. This was reflected in their subsequent decisions.

What comes across most clearly to me from Eamon’s account of his life, written in retirement, is his gratitude to the people in his life: his family who were hugely supportive of him and his work in Africa, his friends, his Oblate colleagues, the Mercy and Holy Rosary Sisters with whom he worked, and, perhaps above all, the long-suffering people in the townships who were so supportive to him when the need was greatest.

The most eloquent testimony to Fr Eamon’s life and work in South Africa is, I think, best summarised in the simple, heartfelt comments of some of his former parishioners when news of his death reached them:

“Thank you, Fr O’Reilly, for your amazing work in South Africa. May you receive your reward in Heaven.”

“Your life stands as a testament to love and fidelity. My condolences to all who knew and experienced life with you. Another saint to shed his light on us.”

“Your dedication to the under privileged will remain in our hearts.”

Join Veronica Conlon, praying from Holyhead on the Isle of Anglesey as...

WATCH: Join with Veronica Conlon in Holyhead for our morning prayer. Veronica...

We invite you to join Fr Eduardo again this morning in our...

Seeking your feedback on Oblate communications