Gospel Reflection for 29th March 2020
The Fifth Sunday of Lent 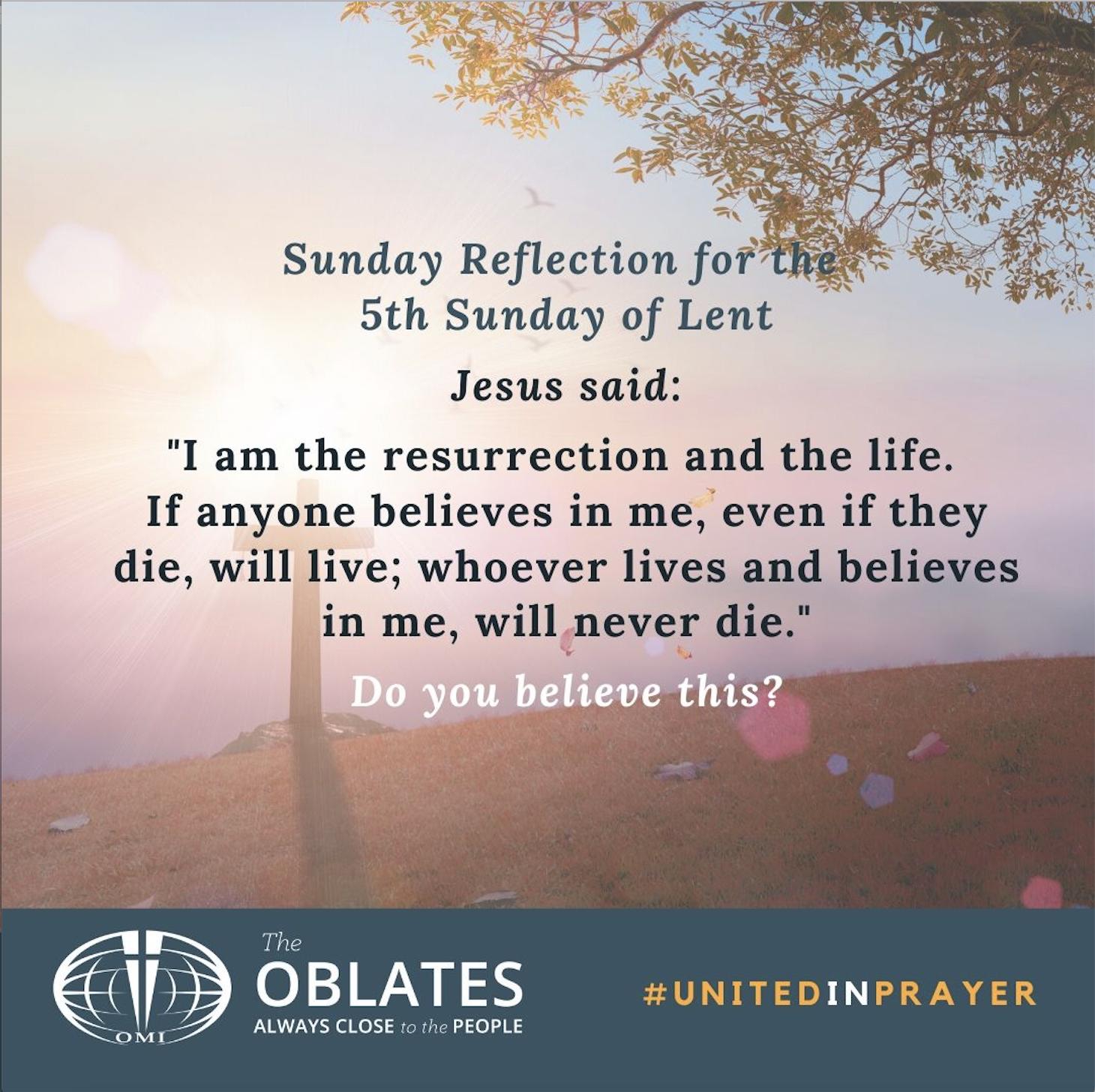 Jesus, the Resurrection and the Life

Next Sunday is Palm or Passion Sunday, the beginning of Holy Week when we recall and participate in the final week of Jesus’ earthly life. So it may seem a little premature to be talking about resurrection and new life. The gospel today, which is very long, tells us about Martha, Mary, their brother Lazarus and their good friends Jesus.

As we remember, Lazarus has died and has already been buried. Jesus hears about this but takes his time visiting his grieving sisters. When Jesus does arrive, Martha goes to meet him and is not happy with him at all. She says to him; ‘If you had been here, my brother would not have died.’ Jesus answers her by saying; ‘Your brother will rise again.’ Her response his honest and faith-filled; ‘I know he will rise again at the resurrection at the last day.’ The Jesus takes this difficult and painful conversation to another level altogether; ‘I am the resurrection and the life. If anyone believes in me, even if they die, will live; whoever lives and believes in me, will never die. Do you believe this?’

Maybe as the end of  our Lenten Journey is in sight and we prepare to celebrate the Passion and Resurrection of Jesus, this gospel and the words of Jesus offer us some much needed encouragement and hope. The cross and the crucifix are central to Christian art, worship, prayer and devotion. But we have to remind ourselves not to simply stay at the cross. The pain of the cross leads us to the joy of the Resurrection. It is through the life, death and resurrection of Jesus that we are offered a new way of living our daily lives and the gift of new and everlasting life.

The words of encouragement and hope that Jesus offers Martha, he offers to each of us personally at this stage of our Lenten journey. He says to you and me this very day, ‘I am the resurrection and the life. If anyone believes in me, even if they die, will live; whoever lives and believes in me, will never die. Do you believe this?’ Today and for the next few days, it might be good for us to sit with these words and particularly the question Jesus asks us; ‘do you (actually) believe this?

These days as we all know are not normal. With serious restrictions on our travel and association with others, we may be feeling alone or isolated; we are not. Through our faith, hope and prayer we are deeply connected to each other and to Jesus. At the start of Lent, Jesus asked us to stay with him; now today of all days we need to ask Jesus to be and stay with us. Jesus is about to experience his time of suffering and pain. For many of now, we too are experiencing fear and uncertainty in ways we have never before. This is our Passion Sunday in a very real and personal way; as families, communities and indeed whole countries. In these very challenging days let us not lose hope or faith in ourselves, each other or Jesus. Can we, in any way today hear these words of Jesus spoken to each of us personally; , ‘I am the resurrection and the life. If anyone believes in me, even if they die, will live; whoever lives and believes in me, will never die. Do you believe this?’

I am the resurrection and the life.

There was a man named Lazarus who lived in the village of Bethany with the two sisters, Mary and Martha, and he was ill. – It was the same Mary, the sister of the sick man Lazarus, who anointed the Lord with ointment and wiped his feet with her hair. The sisters sent this message to Jesus, ‘Lord, the man you love is ill’. On receiving the message, Jesus said, ‘This sickness will end not in death but in God’s glory, and through it the Son of God will be glorified’.

Jesus loved Martha and her sister and Lazarus, yet when he heard that Lazarus was ill he stayed where he was for two more days before saying to the disciples, ‘Let us go to Judaea’. The disciples said, ‘Rabbi, it is not long since the Jews wanted to stone you; are you going back again?’ Jesus replied: ‘

Are there not twelve hours in the day?
A man can walk in the daytime without stumbling
because he has the light of this world to see by;
but if he walks at night he stumbles,
because there is no light to guide him.’

He said that and then added, ‘Our friend Lazarus is resting, I am going to wake him’. The disciples said to him, ‘Lord, if he is able to rest he is sure to get better’. The phrase Jesus used referred to the death of Lazarus, but they thought that by ‘rest’ he meant ‘sleep’, so Jesus put it plainly, ‘Lazarus is dead; and for your sake I am glad I was not there because now you will believe. But let us go to him.’ Then Thomas – known as the Twin – said to the other disciples, ‘Let us go too, and die with him’.

On arriving, Jesus found that Lazarus had been in the tomb for four days already. Bethany is only about two miles from Jerusalem, and many Jews had come to Martha and Mary to sympathise with them over their brother. When Martha heard that Jesus had come she went to meet him. Mary remained sitting in the house. Martha said to Jesus, ‘If you had been here, my brother would not have died, but I know that, even now, whatever you ask of God, he will grant you’. ‘Your brother’ said Jesus to her ‘will rise again.’ Martha said, ‘1 know he will rise again at the resurrection on the last day’. Jesus said:

‘I am the resurrection.
If anyone believes in me, even though he dies he will live,
and whoever lives and believes in me
will never die.
Do you believe this?’

‘Yes, Lord,’ she said ‘I believe that you are the Christ, the Son of God, the one who was to come into this world.’ When she had said this, she went and called her sister Mary, saying in a low voice, ‘The Master is here and wants to see you’. Hearing this, Mary got up quickly and went to him. Jesus had not yet come into the village; he was still at the place where Martha had met him. When the Jews who were in the house sympathising with Mary saw her get up so quickly and go out, they followed her, thinking that she was going to the tomb to weep there.

Mary went to Jesus, and as soon as she saw him she threw herself at his feet, saying, ‘Lord, if you had been here, my brother would not have died’. At the sight of her tears, and those of the Jews who followed her, Jesus said in great distress, with a sigh that came straight from the heart, ‘Where have you put him?’ They said, ‘Lord, come and see’. Jesus wept; and the Jews said, ‘See how much he loved him!’ But there were some who remarked, ‘He opened the eyes of the blind man, could he not have prevented this man’s death?’ Still sighing, Jesus reached the tomb: it was a cave with a stone to close the opening. Jesus said, ‘Take the stone away’. Martha said to him, ‘Lord, by now he will smell; this is the fourth day’. Jesus replied, ‘Have I not told you that if you believe you will see the glory of God?’ So they took away the stone. Then Jesus lifted up his eyes and said:

‘Father, I thank you for hearing my prayer.
I knew indeed that you always hear me,
but I speak for the sake of all these who stand round me,
so that they may believe it was you who sent me.’

When he had said this, he cried in a loud voice, ‘Lazarus, here! Come out!’ The dead man came out, his feet and hands bound with bands of stuff and a cloth round his face. Jesus said to them, ‘Unbind him, let him go free’.

Have you signed up for our daily Lenten reflections?

Forgive from the heart. Last Sunday Jesus offered us a way of...

Forgiveness When we look back at history or indeed at the news...

Get behind me Satan! Today’s gospel continues directly from last Sunday’s when...

Gospel Reflection for 15th and 16th August The Assumption of the Blessed...