Gospel Reflection for 22nd March 2020
The Fourth Sunday of Lent 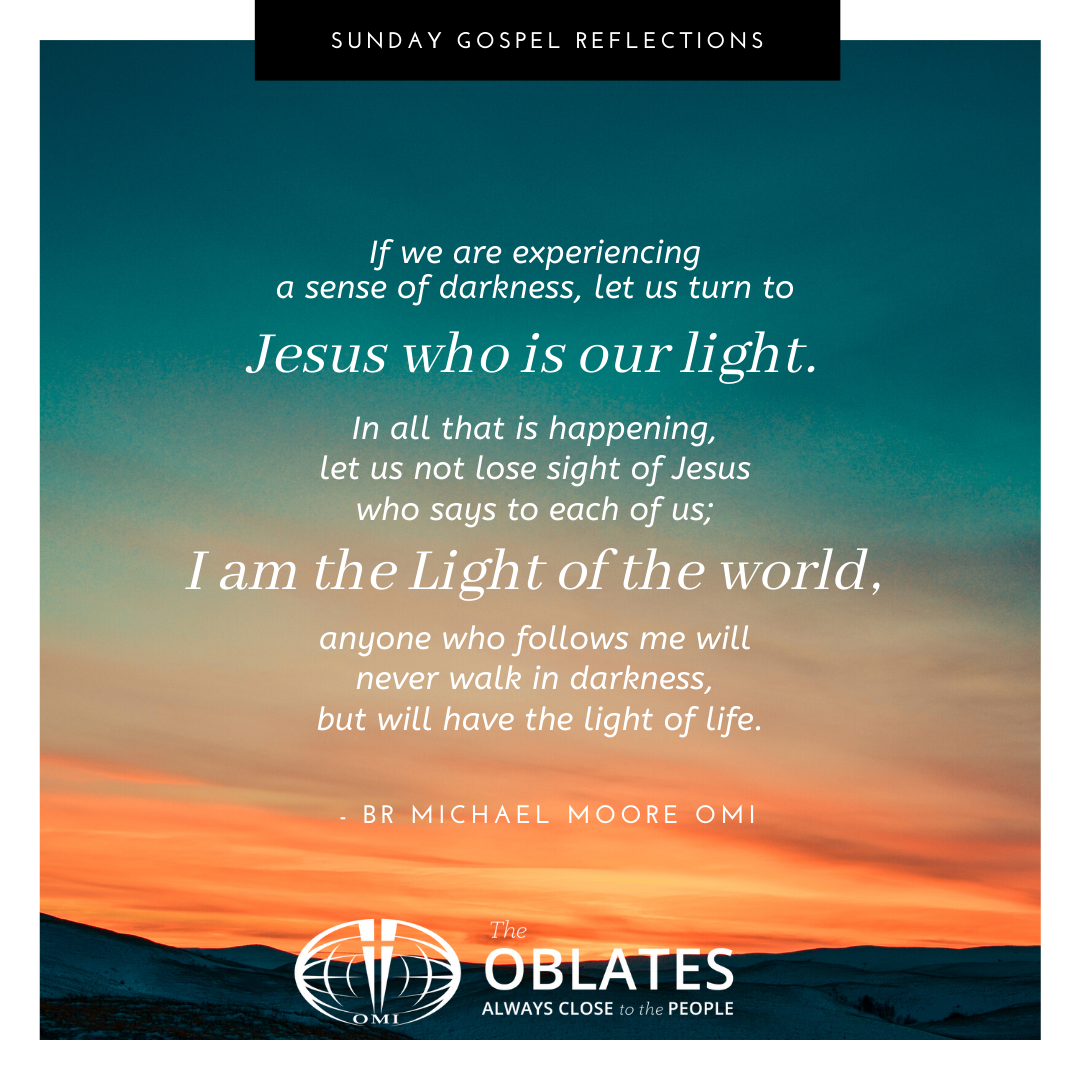 The man who was born blind

The gospel today is very long; but it is also full of detail and well worth reading slowly. It concerns the man who was born blind whom Jesus healed on the Sabbath. A major theme in John’s gospel is light versus darkness. The first few verses of John’s gospel tell us that John the Baptist ‘was not the light, only witness to speak for the light… the Word was the true light that brings light to all.’ Later in the same gospel, Jesus clearly says for all to hear, I am the Light of the world, anyone who follows me will never walk in darkness, but will have the light of life.’ (John. 8.12).

Those of us who are able to see clearly cannot even imagine what it must be like to be born blind or lose ones sight. What must it be like never to see a flower, a sunset, or child’s smile. This is the reality and experience of the man in the gospel; he was born blind and has spent his whole life in darkness. Jesus heals him on the Sabbath which angers the religious leaders. They don’t believe the man when he tells them that Jesus healed him and they condemn Jesus as a sinner because he broke their law. It is they who have shut their hearts and closed their eyes from seeing Jesus for who he truly is. When Jesus tells the man it was the Son of Man who healed him, and says that it is he at whom he is looking, he says to Jesus, ‘Lord, I believe.’ He is no longer in darkness at any level. The Pharisees, however, refuse to believe or accept Jesus; they remain blind and prefer their own self-made darkness.

Through the journey and message of Lent, Jesus comes to offer us his light. He shines his light on any part of our lives that need healing. He offers to take us by our hand, lead us from our self-made darkness and gently lead us into the light of his healing and forgiveness. It is often through the hurtful things we say and do that we find ourselves in darkness. The longer we leave it and stay there, the harder for us it is to experience anything else. Jesus is the Light of the world who comes into the shadows of our lives and invites us to step forward in his light. How does it serve us to stay in darkness? When Jesus invites us out from the darkness, we have two choices; we can follow the example of the man Jesus healed, whose heart and eyes were opened, or we can refuse Jesus’ invitation, just as the Pharisees did and remain blind. The choice is ours.

These days and weeks in our homes, communities and countries we are being asked to face and deal with a whole new reality because of the Coronavirus. These are challenging times for all of us. But we are not alone; Jesus the Light of the world is with us. In these days of confusion and uncertainty, he is our truth. If we are experiencing a sense of darkness, let us turn to Jesus who is our light. In all that is happening, let us not lose sight of Jesus who says to each of us; I am the Light of the world, anyone who follows me will never walk in darkness, but will have the light of life.’

He went off and washed himself, and came away with his sight restored.

AsJesus went along, he saw a man who had been blind from birth. His disciples asked him, ‘Rabbi, who sinned, this man or his parents, for him to have been born blind?’ ‘Neither he nor his parents sinned,’ Jesus answered ‘he was born blind so that the works of God might be displayed in him.

‘As long as the day lasts
I must carry out the work of the one who sent me;
the night will soon be here when no one can work.
As long as I am in the world
I am the light of the world.’

Having said this, he spat on the ground, made a paste with the spittle, put this over the eyes of the blind man. and said to him, ‘Go and wash in the Pool of Siloam (a name that means ‘sent’). So the blind man went off and washed himself, and came away with his sight restored.

His neighbours and people who earlier had seen him begging said, ‘Isn’t this the man who used to sit and beg?’ Some said, ‘Yes, it is the same one’. Others said, ‘No, he only looks like him’. The man himself said, ‘I am the man’. So they said to him, ‘Then how do your eyes come to be open?’ ‘The man called Jesus’ he answered ‘made a paste, daubed my eyes with it and said to me, “Go and wash at Siloam”; so I went, and when I washed I could see.’ They asked, ‘Where is he?’ ‘I don’t know’ he answered.

They brought the man who had been blind to the Pharisees. It had been a sabbath day when Jesus made the paste and opened the man’s eyes, so when the Pharisees asked him how he had come to see, he said, ‘He put a paste on my eyes, and I washed, and I can see’. Then some of the Pharisees said, ‘This man cannot be from God: he does not keep the sabbath’. Others said, ‘How could a sinner produce signs like this?’ And there was disagreement among them.

So they spoke to the blind man again, ‘What have you to say about him yourself, now that he has opened your eyes?’ ‘He is a prophet’ replied the man. However, the Jews would not believe that the man had been blind and had gained his sight, without first sending for his parents and asking them, ‘Is this man really your son who you say was born blind? If so, how is it that he is now able to see?’ His parents answered, ‘We know he is our son and we know he was born blind, but we don’t know how it is that he can see now, or who opened his eyes. He is old enough: let him speak for himself.’ His parents spoke like this out of fear of the Jews, who had already agreed to expel from the synagogue anyone who should acknowledge Jesus as the Christ. This was why his parents said, ‘He is old enough; ask him’.

So the Jews again sent for the man and said to him, ‘Give glory to God! For our part, we know that this man is a sinner.’ The man answered, ‘I don’t know if he is a sinner; I only know that I was blind and now I can see’. They said to him, ‘What did he do to you? How did he open your eyes?’ He replied, ‘I have told you once and you wouldn’t listen. Why do you want to hear it all again? Do you want to become his disciples too?’ At this they hurled abuse at him: ‘You can be his disciple,’ they said ‘we are disciples of Moses: we know that God spoke to Moses, but as for this man, we don’t know where he comes from’. The man replied, ‘Now here is an astonishing thing! He has opened my eyes, and you don’t know where he comes from! We know that God doesn’t listen to sinners, but God does listen to men who are devout and do his will. Ever since the world began it is unheard of for anyone to open the eyes of a man who was born blind; if this man were not from God, he couldn’t do a thing.’ ‘Are you trying to teach us,’ they replied ‘and you a sinner through and through, since you were born!’ And they drove him away.

Jesus heard they had driven him away, and when he found him he said to him, ‘Do you believe in the Son of Man?’ ‘Sir,’ the man replied ‘tell me who he is so that I may believe in him.’ Jesus said, ‘You are looking at him; he is speaking to you’. The man said, ‘Lord, I believe’, and worshipped him.
Jesus said: ‘It is for judgement that I have come into this world, so that those without sight may see  and those with sight turn blind’.

Hearing this, some Pharisees who were present said to him, ‘We are not blind, surely?’
Jesus replied:’Blind? If you were, you would not be guilty,  but since you say, “We see”,  your guilt remains.

Have you signed up for our daily Lenten reflections?

Jesus, the Resurrection and the Life Next Sunday is Palm or Passion...

The man who was born blind The gospel today is very long;...

The Woman at the Well John’s gospel is known for its long...

The Transfiguration: It is good that we are here In the gospel...

Do not lead us into temptation Lent is a Pilgrimage, a Journey,...