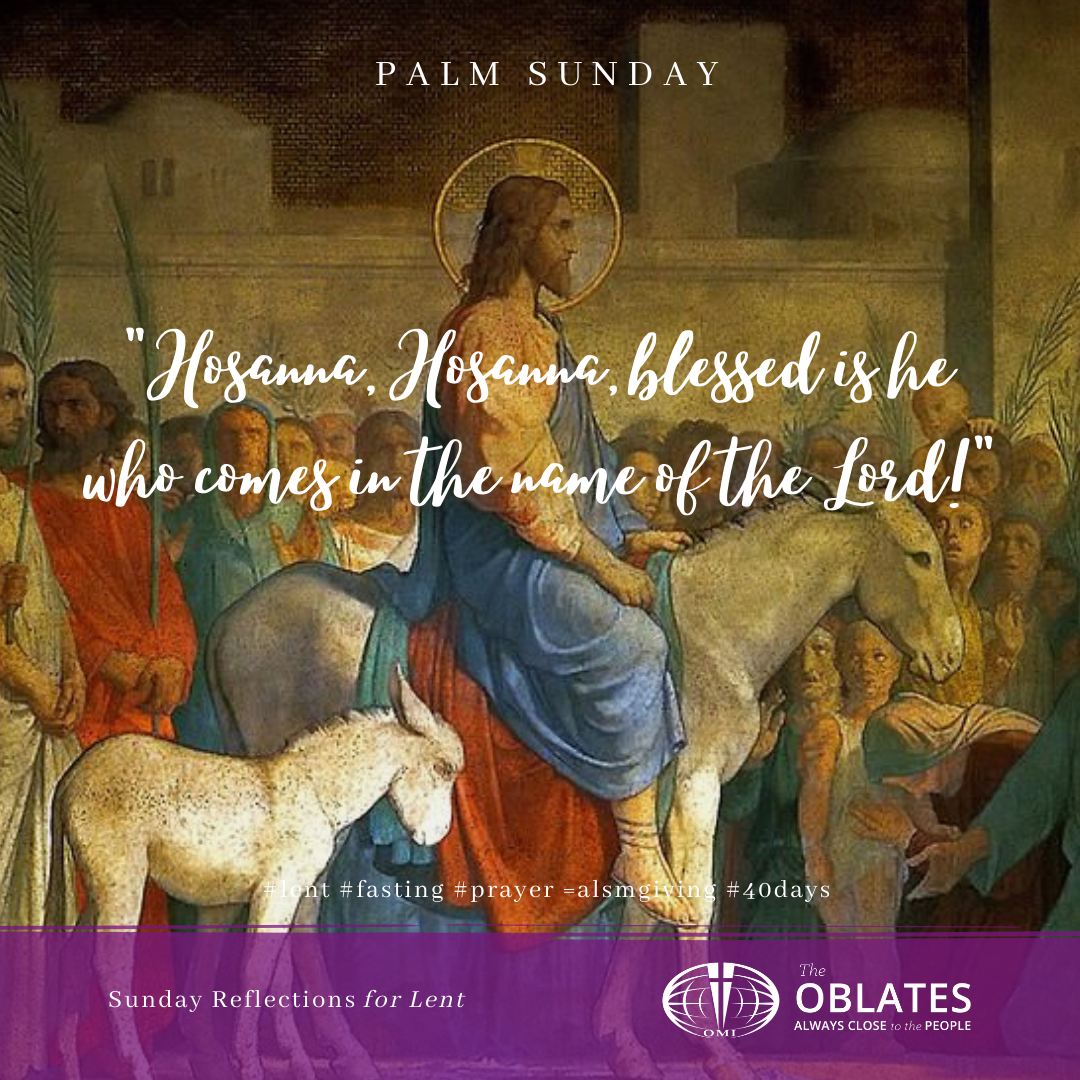 The events that begin on Palm Sunday and take place for the rest of Holy Week are basically the story of a human drama; it is the drama of Jesus and it is also our drama. As he enters into the dramatic events of his final week, he invites us to follow and stay with him as he does every Easter.

We are asked not just to remember Palm Sunday as an historical event that took place in the past. More importantly we are called to try our best to truly enter into the events as they unfold and to experience what happened as if we are actually there with Jesus.  We are celebrating and taking part in the life, death and resurrection of Jesus as they happen to and for us today.

Jesus enters into the city on a great wave of hope, joy and optimism. The crowd line the streets, they wave palms, put their cloaks on the ground as they shout out his name. This was an ancient tradition in Rome used to welcome soldiers and armies home after battle. The people welcome Jesus in the same way triumphantly shouting, Hosanna, Hosanna, blessed is he who comes in the name of the Lord. This wave of popularity won’t last too long; how quickly the crowd will change and turn against Jesus. These very same people, who initially welcomed Jesus joyfully, will soon shout angrily, ‘Crucify him, Crucify him.’ It is not only the crowd who turn against Jesus. His closest friends betray, deny and desert him. The rest of them run and abandon him; he is left alone.

There is always the danger that we simply re-enact the liturgy and prayers of Palm Sunday and Holy Week so that we get them right – the way we want to. If we are not careful, we can lose sight of what we are actually taking part in and remembering. As well as celebrating Palm Sunday and the rest of this week great week with reverence and dignity, we also need to take the time to ask ourselves what it is all about and what it actually means to each of us today.

Perhaps these are some questions that might help us to enter more fully into the week ahead. Where am I this Palm Sunday as the drama of Holy Weeks begins? Where am I as Jesus passes by? Am I one of the crowd shouting out his name or am I at the back hiding and protecting myself? Am I like Judas in any way? When I have betrayed others or Jesus? When like Peter, have I denied knowing Jesus? Have I ever behaved like Pilate and judged or condemned others? On the other hand, when I have followed the example of Simon and Veronica and reached out to help others who were struggling? Having stood with the crowd welcoming Jesus, will I later stand with the same people and shout ‘Crucify him, Crucify him?’

As I celebrate Palm Sunday, I am called to ask where and who I am in the crowd. Am I actively involved or a silent witness watching from a safe distance? This is a week to pray and then decide what kind of follower of Jesus I am and hope to be.

As we begin this most holy and sacred of weeks, may Jesus be our constant companion. May we each enter into the mystery of Jesus’ life, death and resurrection with faith, hope and confidence.

The Passion of our Lord Jesus Christ according to Mark

Each day, we email out a short video for the day based on a piece of scripture from the day’s mass.

The events that begin on Palm Sunday and take place for the...

Unless a grain of wheat dies My father was a gardener all...

Jesus is lifted up for all to see In Jewish history Moses...