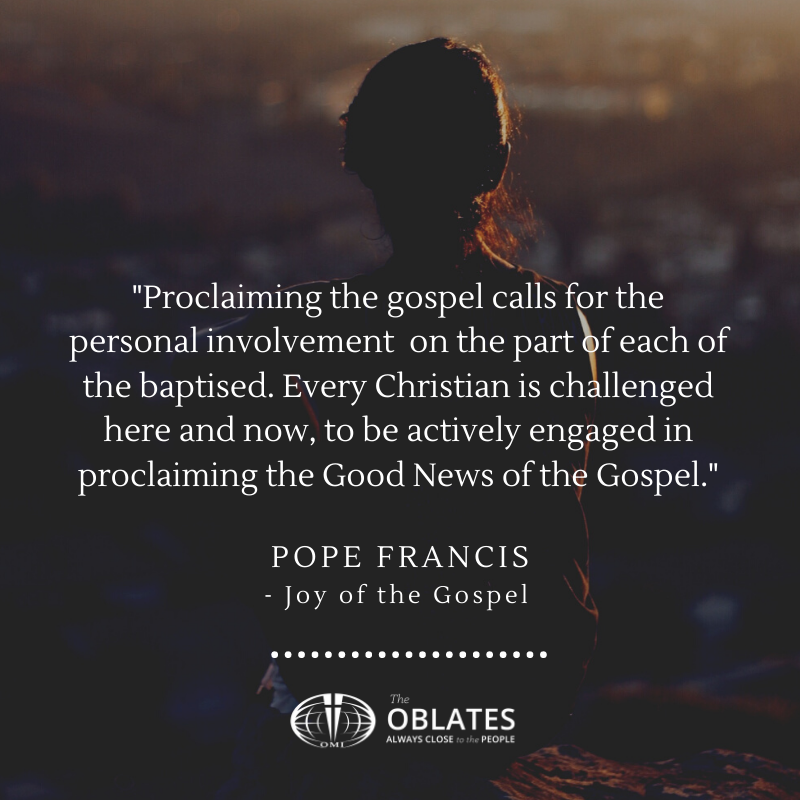 Repent and believe the Good News…

The gospel for this Sunday begins with John the Baptist having being arrested and then we read, from that moment Jesus began his preaching with the message, ‘Repent, for the Kingdom of heaven is close at hand.’ We can’t and shouldn’t reduce the life Jesus to that of a politician, but if we want to know the slogan of Jesus and his mission; this is it. If we couple this with, ‘The Spirit of the Lord is with me, I have been anointed, I have been sent to proclaim good news to the poor,’ then we can sum up the total mission and ministry of Jesus. It was his mission then and through the church, it is still the mission of Jesus. It’s not that the church of God has a mission, but the mission of God has a church! We are that Church, and God gives us our mission. It is through each of us that the mission of God which Jesus came to proclaim continues.

This began when Jesus called those he met in the gospel. Today we read that as he walked by the shore of the Sea of Galilee he saw two brothers, Peter and his brother Andrew. Jesus called them by their names and said, ‘Follow me and I will make you fishers of people.’ Then he called John and Zebedee and they too followed Jesus. What did they do with Jesus? They went around teaching in the synagogue, they proclaimed the Good News of the Kingdom, they cured and healed those who were sick.

Right from the beginning of his mission and ministry, Jesus called others to join him. Even Jesus couldn’t do it all on his own. He called them and many others by their name. They spent time with him, ate and drank with him, talked and listened to him and prayed with him. Then he sent them out in his name not their own saying to them; ‘As the Father sent me, so I am sending you.’ So the mission that God entrusted to Jesus, he entrusts to ordinary men and women. We are the descendants of those Jesus first called in the gospel. We think of Mary at the tomb who was called by name and sent out with the words, ‘Go and tell.’ We are told that the Woman at the well went back to her village and told the others whom she met and that many believed in Jesus because of what she said.

These and so many others through the centuries were called by Jesus to carry on his mission and ministry. Today we are the people who are called by our names by Jesus. Right now, you and I are the ones who are given the responsibility of carrying on the mission of  Jesus. He calls us personally by our name as he called Peter, Andrew and Mary by their names. In reality we are no different they were.

As Pope Francis says; ‘Proclaiming the gospel calls for the personal involvement  on the part of each of the baptised. Every Christian is challenged here and now, to be actively engaged in proclaiming the Good News of the Gospel.’ (The Joy of the Gospel 120)

Jesus is still calling each of us by our name; what is our response to that call today?

Jesus went and settled in Capernaum: in this way the prophecy of Isaiah was fulfilled

Hearing that John had been arrested Jesus went back to Galilee,  and leaving Nazareth he went and settled in Capernaum, a lakeside town on the borders of Zebulun and Naphtali.  In this way the prophecy of Isaiah was to be fulfilled:

‘Land of Zebulun! Land of Naphtali!
Way of the sea on the far side of Jordan,
Galilee of the nations!
The people that lived in darkness
has seen a great light;
on those who dwell in the land and shadow of death
a light has dawned.’

From that moment Jesus began his preaching with the message, ‘Repent, for the kingdom of heaven is close at hand.’

As he was walking by the Sea of Galilee he saw two brothers, Simon, who was called Peter, and his brother Andrew; they were making a cast in the lake with their net, for they were fishermen. And he said to them, ‘Follow me and I will make you fishers of men.’ And they left their nets at once and followed him. Going on from there he saw another pair of brothers, James son of Zebedee and his brother John; they were in their boat with their father Zebedee, mending their nets, and he called them. At once, leaving the boat and their father, they followed him.

Going on from there he saw another pair of brothers, James son of Zebedee and his brother John; they were in their boat with their father Zebedee, mending their nets, and he called them. At once leaving the boat and their father, they followed him.

He went round the whole of Galilee teaching in their synagogue proclaiming the Good News of the kingdom and curing all kinds diseases and sickness among the people.

The Heart of the Matter  The Scribes and Pharisees never missed an...

The Prophets Simeon and Anna By now the Christmas tree is gone...

Repent and believe the Good News… The gospel for this Sunday begins...

Jesus the Lamb of God In some way, our gospel today is...