200 Years Through the Eyes of our Crucified Saviour…
A directionless rich self-centred young nobleman began to question the meaninglessness of his life and to search for a happiness that eluded him. 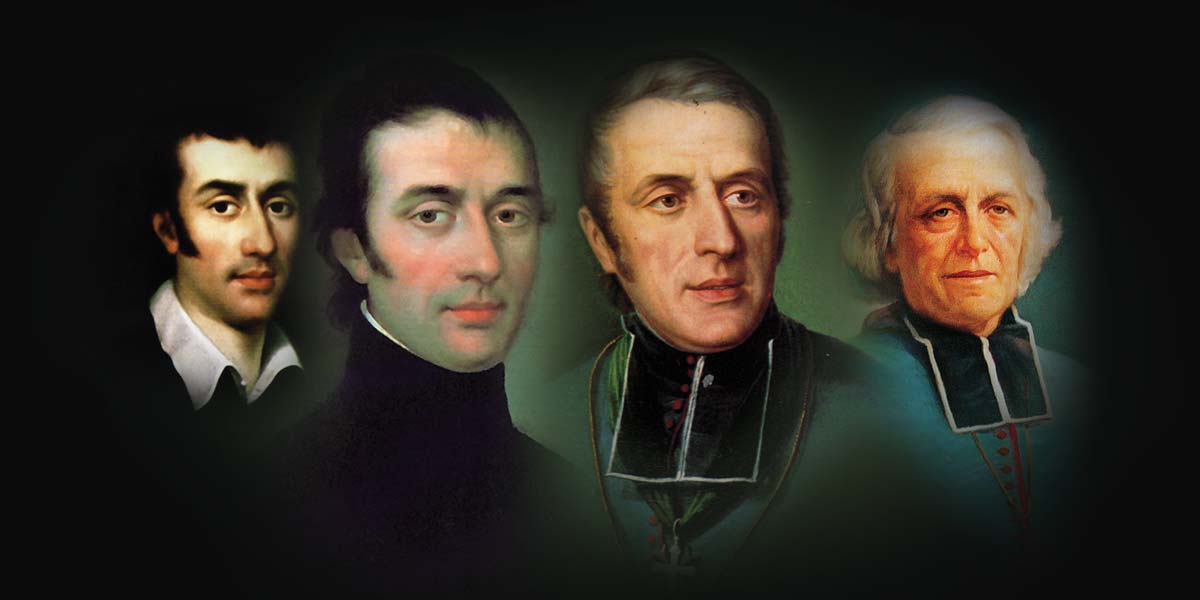 At around the age of 25 he experienced a moment of intuition that changed his life. One Good Friday, in the presence of the Cross he became aware that it was Jesus Christ the Saviour who was looking at him in love. Eugene de Mazenod was able to find in this loving look his source of permanent happiness. Impelled by this realization, his life became outward looking and he began to see others through the eyes of the Saviour. They were as lost as he had been, and he was driven into action to bring them into the same experience that had captivated him. He dedicated himself  to bringing the Good News of salvation to those who were poor and abandoned because they had no one to lead them to an understanding of God’s love for them.

Two hundred years ago, on 25 January 1816, he invited others to join him in his adventure as Missionaries. Initially working in the south of France, in 1841 they were called to bring their message to Britain and Ireland and further afield to Canada – and eventually, to some 67 countries of the world. We give thanks that in receiving Eugene’s message, they in turn became missionaries and in the vast majority of those countries the Anglo-Irish Oblates and their co-operators have been present!

Two hundred years later we pause to marvel at what God has done through the Oblate missionaries and all who participate in this adventure as partners and associates. It is a moment of giving thanks for those who have been bringers of the Gospel and the sacraments. If we focus only on the missionaries, however,  we miss the point of our jubilee: to give thanks for all whose lives have been touched by this missionary zeal.

What a history we have to be grateful for! It is God’s history that is reflected through the smiles and serenity of the suffering who have been taken to Lourdes each year. It is reflected through the lives of young people who, like the young Eugene, have found a meaning and direction. It shines in courageous people who have made mistakes in  their lives and then have found the possibility of a new beginning. It echoes in the faith of countless people who have come to know the loving embrace of Jesus as Saviour in our parishes, schools and chaplaincies. How many families have praised God because they received an Oblate welcome when tragedy drove them away from their homes and country as they were desperately searching for the possibility of a normal life.

Impressive is the map of the spread of the Anglo-Irish Oblate missionaries around the world: Africa, Asia, Australia, South and North America. Everywhere incalculable numbers of people have come to know the Gospel for the first time and have been nurtured in their life of faith – and often in their material necessities too. I am personally indebted to these men who came to South Africa and started the parishes where I was born and grew up. It was the Anglo-Irish Oblates who directly taught me to know Jesus in Johannesburg – and who trained generations of South African Oblates. It was these courageous missionaries who paved the way in serving those whom society cast aside. Wherever there was suffering, we could be sure that the Oblates were present with the comfort of the Saviour!

How much we have to give thanks for in our 200-year history – how many people join in our magnificat of praise in Brazil, Indonesia, Australia, and every other country where these missionaries have been! And how richly have the Oblates themselves been evangelized and enriched by the very people they served.

As we look back on two centuries of existence, however, we are also aware of how many mistakes we have made, how many people we have hurt by what we have done or what we have failed to do, how many opportunities we have missed, how many regrets we have… Only the loving look of Jesus the Crucified Saviour can bring healing and forgiveness and teach us not to repeat our failures.

It is also to the Saviour’s Cross that we bring our sadness at the ageing of our missionaries and the decreasing numbers of vocations. It is the look of the Saviour, however, who lovingly reminds us that the vision and mission of St Eugene is alive and continues to touch people through his associates and partners. Just as the people of Britain and Ireland welcomed the Oblate ministry in 1841 and they, in turn,  became missionaries – so too, today, those who received have become missionaries in their homes, in their families, parishes, places of work… The missionary process continues in new and different ways.

January 25 invites us to pause and reflect, and the only possible place is at the foot of the Cross. Just as Eugene was embraced by the loving look of God , so too may we continue to allow ourselves to be looked at and renewed – and in this way continue the 200 year-old adventure started by Eugene as it is expressed in our Rule of Life:

“The cross of Jesus Christ is central to our mission. Like the apostle Paul, we “preach Christ and him crucified” (1 Cor 2: 2). If we bear in our body the death of Jesus, it is with the hope that the life of Jesus, too, may be seen in our body (cf. 2 Cor 4:10). Through the eyes of our crucified Saviour we see the world which he redeemed with his blood, desiring that those in whom he continues to suffer will know also the power of his resurrection (cf. Phil 3: 10).”  Constitution 4