Reflection for the 7th Sunday of Easter, May 29th
By Brian Maher OMI 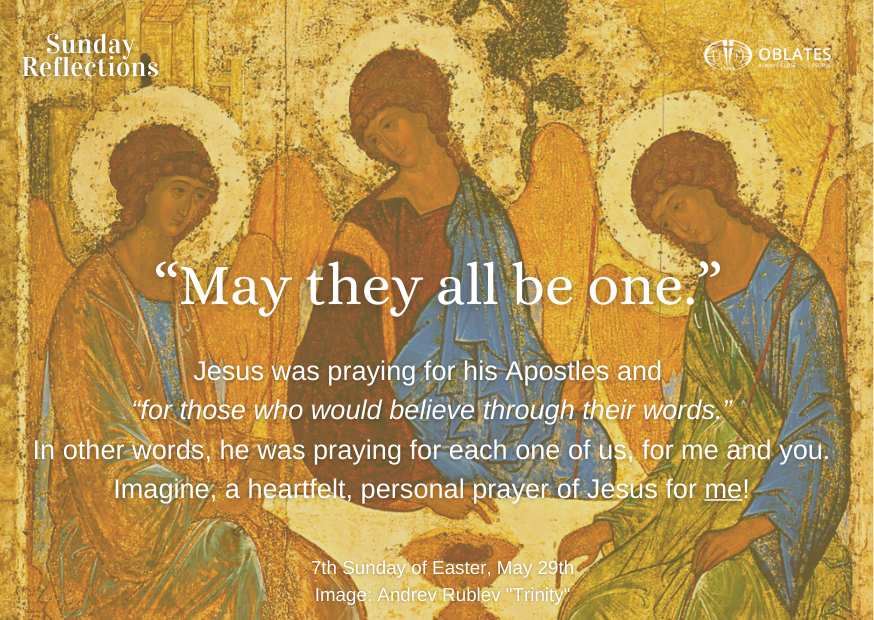 The best image I have of ‘unity’ is found in Rublev’s icon of the Trinity.

While his painting was inspired by the three angels who visit Abraham in Genesis 18, there can be no doubt that Rublev is giving us a glimpse – a very wonderful glimpse – into the interior life of God.

Sitting before it I see gentleness, total serenity, the never-ending circular movement between the three figures of Father, Son and Spirit, and a complete unity which is based on humility, self-knowledge, and acceptance. Sometimes I try to imagine myself joining them but doing so only breaks the circle, and the union of the figures is somehow broken. The three persons in the icon are totally self-absorbed, lost in a mutual gaze which never ends, or needs to end. 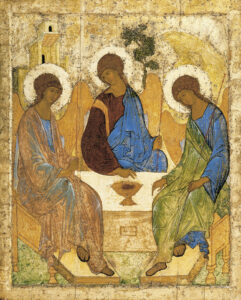 And yet, the table they sit at, the food placed on it, the fingers of Son and Spirit touching the table, and even their clothing, tell us that their infinite self-absorption is already reaching out to share itself. The table, the food, the clothing somehow grounds them in our reality, telling us that their internal life and eternal happiness wants nothing more than to share itself.

When Jesus prays, in today’s Gospel, that “they all might be one, … as you are in me, and I am in you…”  was he aware of the awareness of God which Rublev had in the twelfth century? We can never know the answer to that, except that Jesus had a relationship with his God which enabled him to call him “abba”, the beautiful informal and loving ‘Dad’ or ‘Pop’. For me, it is good that we do not know what Jesus understood about himself. There is something about the search for an answer; something about reflecting on, and wondering about, the life of Jesus which is far greater and more personal than simply being told that this is it!

John places this great prayer of Jesus in the context of the Last Supper, when Judas had just left to betray him. Jesus’ own little band of close friends were far from united in many ways. Aren’t we told that the brothers James and John requested that they be greatest in the Kingdom of God (Mark 10), and that their request angered the other apostles? (Matthew, maybe humorously, toned the story down a bit by putting the request in the mouth of their mother!).

Simon, one of the twelve, was a Zealot, a sect committed to armed revolution to get rid of the Romans, a desire which stands in marked contrast to the values of Jesus himself. Jesus, therefore, as he journeyed through the town and villages, preaching, teaching, and healing, was very aware of how difficult it is to achieve unity.

His prayer to the Father is not coming from a place of idealistic naivety but from a very human understanding of who his disciples were and how they related to one another. When he prays “not only for them, but also for those who would believe through their words”, he knew exactly the difficulties we would have. His prayer is all the stronger, I think, because of that. Knowing the difficulties, he did not tone down his prayer, or underplay its importance.

We sometimes miss why Jesus was making this prayer. Was it so that our world would be peaceful that wars would end, or, as John Lennon says in his beautiful song ‘Imagine’ that “the world will be as one.”?

Of course, these would be admirable prayers, but it was not what Jesus was praying for here. No! he was praying that “all would be one”, so that “the world would believe that you sent me”.

The mission of Jesus, from the very start, was to show us how much God loves us, and to tell us that his “Kingdom was very near”.  Now, as he approaches the end of his life, we see that his mission is still the same. By being one, by being united, we are showing others what God is like, we are witnessing to the very nature of God.

It is a huge challenge Jesus places before us, especially since he knows only too well how difficult it is to achieve unity. Unity, he seems to say, is at the heart of love – of God. It is not something we can ever give up on or forget. Without striving for unity we are false witnesses, showing others, not the real God, but a false God. Isn’t it so sad, but also understandable, that John Lennon, in his haunting song ‘Imagine’ sees peace only possible where there would be “Nothing to kill or die for, and no religion too.”?

No religion! Why? It must be because those of us (no matter what tradition or Religion we belong to) have shown, by how we treat one another, that we witness to a false God who is cruel, intolerant, vengeful, and judgemental; a God the world might be better without!

The challenge of today’s Gospel goes to the very nature of God. It is that big.

This Gospel is frequently presented to us as Jesus praying for the unity of all Religions and Christian traditions. While it is appropriate that we do this, it is not what Jesus had in mind when he made this prayer. He was praying for his Apostles and “for those who would believe through their words.”

In other words, he was praying for each one of us, for me and you.

Imagine, a heartfelt, personal prayer of Jesus for me!

In this, however, the challenge of Jesus is renewed. We cannot push it off as a prayer for ‘ecumenism’, allowing it to be lost in the sea of challenges which are always ‘for others’ and never ‘for me’!

We have the example of Jesus’ own life to help us. He forgave, reached out to all, was tolerant, did not judge or condemn, was gentle and compassionate. These are the values and qualities that bring unity to us, our families, our country, our world.

At Pentecost Jesus did his part in answering his own prayer. He sent us the Holy Spirit to be with us always. In the power of that Spirit the apostles burst into an unsuspecting world with the message of Jesus. It was a message based on a person, Jesus Christ; on his life, death and resurrection and on the God he revealed to us; a loving, gentle, compassionate and forgiving God.

It is the God I see in Rublev’s icon: serene, gentle, humble, dynamic, and united in eternal love.
It is our God.

Father, may they be completely one

Jesus raised his eyes to heaven and said:
‘Holy Father,
I pray not only for these,
but for those also
who through their words will believe in me.
May they all be one.
Father, may they be one in us,
as you are in me and I am in you,
so that the world may believe it was you who sent me.
I have given them the glory you gave to me,
that they may be one as we are one.
With me in them and you in me,
may they be so completely one
that the world will realise that it was you who sent me
and that I have loved them as much as you loved me.
Father, I want those you have given me
to be with me where I am,
so that they may always see the glory you have given me
because you loved me before the foundation of the world.
Father, Righteous One,
the world has not known you,
but I have known you,
and these have known that you have sent me.
I have made your name known to them
and will continue to make it known,
so that the love with which you loved me may be in them,
and so that I may be in them.’

Sunday Reflection for The Assumption of Mary

There are well established links in business psychology between fear, a lack...

Ask any poor person does he or she want to remain poor...

“Lord, teach us how to pray…..” Imagine for a second sitting with...

At first glance, today’s Gospel is clear and unambiguous. It is probably...