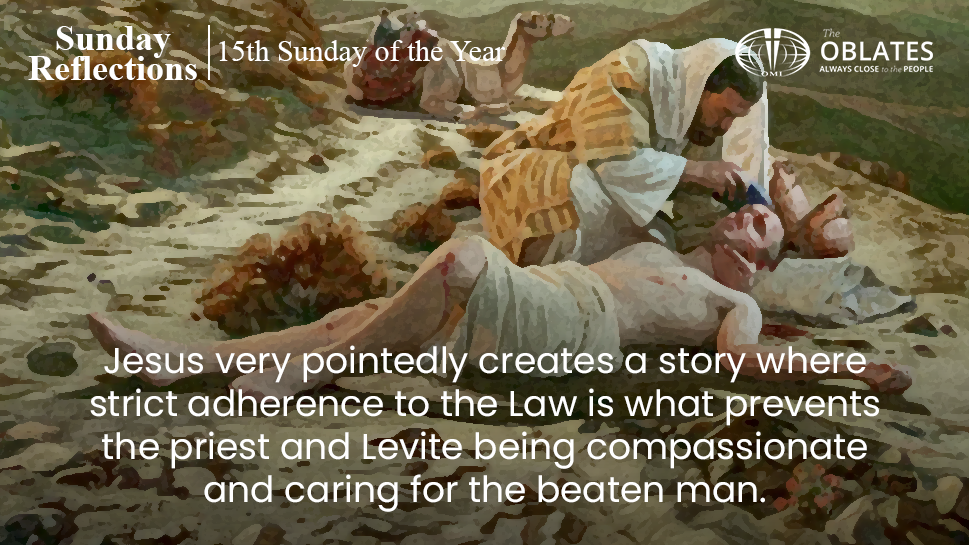 At first glance, today’s Gospel is clear and unambiguous. It is probably one of the stories or parables told by Jesus which is easiest understood. It is told as a simple black and white story with only one right answer. “Who is my neighbour?“ asks the lawyer, once again intent on drawing Jesus into an argument about the Jewish Law which he cannot win. As always, Jesus refuses to enter into simplistic, black and white, right or wrong arguments and instead tells a story which, very cleverly, forces the lawyer to answer his own question.

No, it was a Samaritan man (a member of a Jewish sect despised by the Temple Jews) who “was moved with compassion” and cared for the man, very likely saving his life. He is presented as compassionate, generous, patient and gentle, the unlikely hero of the story. How it must have galled and embarrassed the lawyer to have to acknowledge a Samaritan as the true neighbour of the robbed man.

Did you ever ask yourself why the priest and the Levite actually went so far as to “cross the road” to avoid passing the scene of the robbery? Couldn’t they just have hurried past? Wasn’t it unbelievably callous, not only to ignore the man, but to actually cross the road to avoid him. Why would Jesus choose to place this detail into his story?

You see, the priest and Levite, like the lawyer who asked the question in the first place, were bound by Jewish Laws which governed all aspects of their lives. If, by chance, they stopped and the man turned out to be already dead then they knew they would be automatically considered ‘unclean’ because of their contact with a dead body, and forced to undergo a period of ritual purification lasting several weeks.

They were men of prestige and honour. Men who had weighty responsibilities for Temple worship and having to drop-out at short notice would not only cause serious administrative problems for Temple rotas, but might result in many devout and prayerful Jews being let down if Temple services or sacrifice had to be abandoned or curtailed because they were unavailable.

As they approached the still, battered body on the road, they had to quickly weigh up their responsibilities and options. If the man was dead then nothing could be done for him and huge inconvenience would be the result for many others who needed the priests and Levites to perform sacrifice and lead worship.

If he was not dead then surely someone else would stop, someone who had fewer obligations than they had? As it happened, this is exactly what transpired but it was a Samaritan man who stopped. Might we not argue that their decision to cross to the other side or the road and remain ritually ‘clean’ was almost justified by the arrival of the Samaritan traveller? Might we not argue that what they did in crossing to the other side was not an act of cruel, cold, hard-heartedness but mature men thinking of the greater good, and their responsibilities to the Temple.

In this light, the story isn’t quite as straightforward as it first appears.

Jesus, was himself criticised and hounded by the Pharisees and lawyers for breaking the Jewish Sabbath Laws concerning work and fasting – he cured a crippled woman on the Sabbath and his disciples ate ears of corn as they walked between villages, also on the Sabbath. Here, he very pointedly creates a story where strict adherence to the Law is what prevents the priest and Levite being compassionate and caring for the beaten man.

The lawyer, who accused Jesus of breaking the Law of Moses by curing a sick woman on the Sabbath, must now admit that a despised Samaritan man, hated by Temple Jews, is ‘better’, holier, more compassionate, than the priest and Levite, the highly respected men of Temple worship.

The lawyer must have been furious to be caught in his own trap, while Jesus must have smiled internally at the forced and ironic admission.

Within this story, simple as it is, there are nuances, complexities, and valid reasons why we might need to stop and think before rushing to judge the priest and Levite too harshly.

But within the parable there is also a call to pause and think a bit more. Can strict and blind obedience to even good Religious Laws sometimes actually hinder our ability to be caring and compassionate people? If a hated Samaritan man can emerge as the obviously compassionate person, what does that say about the prejudices which blind us to seeing the good in every human person? If all people, Samaritan and Jerusalem Temple Jews, rich and poor, slaves and free are equal and loved in the eyes of God, then how does that challenge the way I live my life each day?

This is indeed a nice and simple story about compassion and being a “good neighbour”, but it is also about tolerance, prejudice, the Law, and the way God sees us.

Perhaps this parable points us to one of the biggest dangers I think Society and Church face at the moment – that of fundamentalism or dualism.

Increasingly there seems to be a desire to find simplistic, ‘easy’ answers to complex questions. There is a nostalgic yearning to return to those ‘good old day’ (which never really existed in the first place!) when ‘children could play safely on the streets’ and the ‘Friday fast and Sunday obligation and sin’ were taken seriously. The idea that “the only way forward for the Church is back!” is, sadly in my view, not just said, but believed by many young people and young adults who are afraid to open themselves to the real and difficult questions our world, and, I would argue, our God, throws at us.

The problem is that once we reduce everything to the wonderfully simple, but unreal, maxim that “whoever is not with me is against me”, we cannot avoid winners and losers, with the resulting tensions and conflict we have witnessed in Society and in Church in recent years.

We live in a complex, technological world, with instant communication, information, entertainment, news, and ‘chat’ at our fingertips. We can no longer excuse our fears or insecurities with, “I didn’t know” or “I didn’t understand”.

Jesus, in his life, refused to be drawn into narrow, simplistic conversations with only two categories, ‘right or wrong’. The Kingdom of God that he talked of was far too grand, far too majestic, far too wonder-full to be contained within narrow boundaries. The Kingdom he announced is for everyone, regardless of race, creed or colour. It is a kingdom where we all enjoy “the freedom of the children of God” (Romans 8:21); A Kingdom where Jesus says to us, “Do not be afraid.” ; where there is no ‘one right and one wrong way’; where asking the question is greater than getting the ‘right’ answer, and where we know, with absolute certainty, the “I am with you always, even to the end of time.”

The Parable of the Good Samaritan

On one occasion, an expert in the law stood up to test Jesus. “Teacher,” he asked, “what must I do to inherit eternal life?”

“You have answered correctly,” Jesus replied. “Do this and you will live.”

But he wanted to justify himself, so he asked Jesus, “And who is my neighbour?”

In reply Jesus said: “A man was going down from Jerusalem to Jericho, when he was attacked by robbers. They stripped him of his clothes, beat him and went away, leaving him half dead. A priest happened to be going down the same road, and when he saw the man, he passed by on the other side. So too, a Levite, when he came to the place and saw him, passed by on the other side. But a Samaritan, as he traveled, came where the man was; and when he saw him, he took pity on him. He went to him and bandaged his wounds, pouring on oil and wine. Then he put the man on his own donkey, brought him to an inn and took care of him. The next day he took out two denarii and gave them to the innkeeper. ‘Look after him,’ he said, ‘and when I return, I will reimburse you for any extra expense you may have.’”

“Which of these three do you think was a neighbor to the man who fell into the hands of robbers?”

The expert in the law replied, “The one who had mercy on him.”

Jesus told him, “Go and do likewise.”

There are well established links in business psychology between fear, a lack...

Ask any poor person does he or she want to remain poor...

“Lord, teach us how to pray…..” Imagine for a second sitting with...

At first glance, today’s Gospel is clear and unambiguous. It is probably...

If Jesus had a Facebook page, would you join it as a...