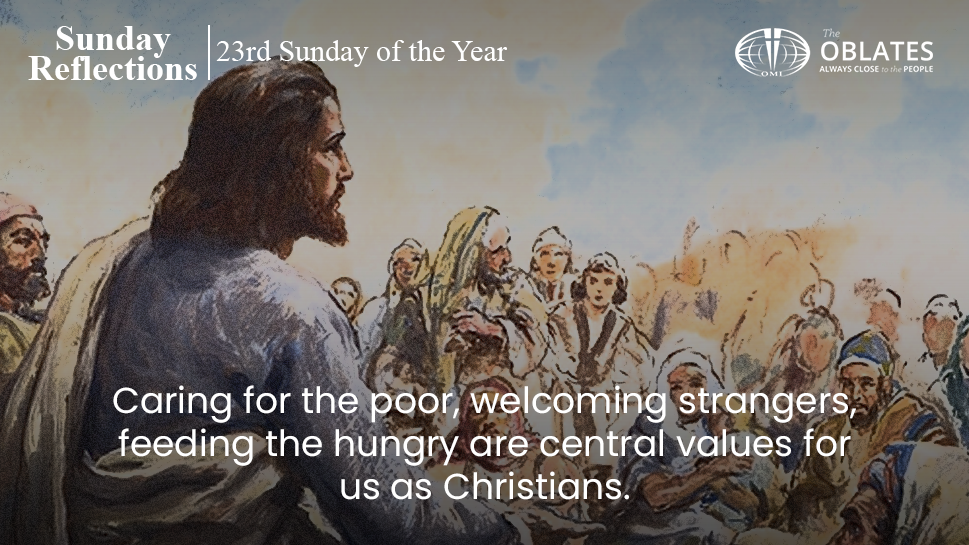 When I worked in schools, frequently I would overhear one teenager say to another, “If my Mum finds out I did that she’ll kill me.” Hearing it didn’t send me rushing to ring the Police or Child Protection services telling them that I thought a child might be murdered when he got home from school. If for one second I thought that the teenager talking actually meant “kill me” in a literal sense, then of course I would be telephoning all of the relevant authorities, but no, in these cases I knew, as did everyone hearing the conversation, that what he meant was, “Mum won’t be well pleased!”

Likewise, on a hot day, if I said that “I was dying of thirst.” nobody in their right mind would ring for an ambulance, knowing perfectly well that all I meant was that I was “very thirsty.” All of us use this type of exaggeration to stress or emphasise things we want to say, and all hearers instinctively know the meaning intended by the words.

So, in today’s Gospel, when Jesus says, “If anyone comes to me without hating his father, mother, wife, children, brothers, sisters, yes, and his own life too, he cannot be my disciple.” how are we to interpret it? Literally? Of course not! Anyone who heard Jesus say this, or anyone of us who read the Gospels and come to know Jesus through them, will know, immediately and instinctively, that he could never, ever, mean that he wants us to ‘hate’ anyone. Is he not the one who said, “Love your enemies; do good to those who persecute you.”? No, we know that he is using this type of language, known as hyperbole, to make or emphasise a point he wants to make. The question we must ask, therefore, is, “what is the point he wants to make?”

Jesus, like John the Baptist before him, was a popular healer and preacher. Unlike John, who drew large crowds to the Jordan for baptism, Jesus tended to avoid the cities, preferring to preach in the villages and smaller towns of Judea and Galilee. His was a gentler and more personal message, best suited to smaller groups, individual encounters and shared meals.

Yet, as a healer, he attracted attention and when word got out that he was in an area he had something of a celebrity status and larger crowds gathered in the hope of seeing miracles and dramatic healings. Some of those who went to see him became interested in his message about the Kingdom of God and joined his band of followers, but most had little interest in his message and came only to see miracles and cures. In these situations, instead of the smaller, more intimate gatherings he liked he was often surrounded by a noisy crowd demanding miracles in a sort of carnival atmosphere.

The beginning of today’s Gospel seems to describe one of these larger occasions: “Great crowds accompanied Jesus on the way…..”. When Jesus turns and speaks to them, I sense a kind of frustration, maybe even exasperation, in what he says. He so wants to speak about the coming of the Kingdom and share with them the love he knows God has for them. Instead he finds himself surrounded by crowds looking for a ‘performance’ from him.

His statement, then, about ‘hating father and mother, wife and children…etc.’ is saying to them, “following me is not about healings and miracles and seeing wonders. There is a commitment involved, and often a difficult commitment. If you cannot make this commitment, go away and leave me in peace!” The exaggeration in the language he uses may be partly frustration but certainly it emphasises what he is saying about commitment.

The two parables which follow say exactly the same thing, though is a more reasonable manner. They say “don’t start something unless you intend to finish it.” Whether it is building a tower or winning a war, only a fool wastes time, energy and money by starting something he doesn’t intend to finish.

I don’t want to over mention my times in education, but teenagers, despite the arrogance of youth and raging hormones, can teach us so much about honesty and integrity. Older teenagers often told me that their rejection of what they called ‘Religion’ (all Religions) was based primarily on what they perceived as hypocrisy and a lack of authenticity by those who claim to be ‘religious’. They would say, “There is so much talk about religion and love and so much Church-going, but look at the state of the world – wars, famine, injustice, homelessness, lack of care for the planet we inhabit, etc.. If this is what ‘Religion’ stands for count me out!”

We adults will no doubt reply that all of these issues are hugely complex, and simplistic throw away criticisms are unfair. I’d agree. But there is a truth in what they say too, and it is a truth which, I think, links with our Gospel today.

Caring for the poor, welcoming strangers, feeding the hungry are central values for us as Christians. Yet, the gap between rich and poor grows greater each year, we spend more money and energy keeping people out of our countries than we do welcoming them, and statistically the world produces enough food each year to feed one and a half times the global population.

In light of our Gospel today might Jesus, if he appeared among us, say, “Why are you letting this happen? Did you not see it in the ‘terms and conditions’ of calling yourself Christian?”

It was G.K. Chesterton who said, “The problem with Christianity is not that it has been tried and found wanting, but that it has been found difficult and left untried.” That is a hard and challenging statement but one we cannot ignore.

When Jesus, in today’s Gospel pointed out that being a follower of his involved making some very big and sometimes difficult commitments, his advice was “don’t start unless you know what is involved in being a Christian, and accept the terms and conditions that go with it.”

He was talking to those who had yet to make that commitment.

What about us? Most of us call ourselves Christian and through Baptism we are Christian. We bear the title “Christian”, baptise our children and ask for a Christian funeral.

But when it comes to the challenging commitments involved in living as a Christian have we, in truth, started and somewhere along the line stopped and given up?

Have the challenges of “hating father, mother, wife, children, brothers, sisters, yes, and your own life too…” been too much for us? Those words are not meant literally, but sometimes living as a Christian in today’s world is no less daunting.

The uneasy question this Gospel forces me to ask myself is this: If I was arrested and charged with being a Christian, might the jury, after viewing all of the evidence of my lifestyle choices, find me ‘not guilty’?

Maybe I need to dig out the Sermon on the Mount and check those T’s & C’s again!

Great crowds accompanied Jesus on his way and he turned and spoke to them. “If any man comes to me without hating his father, mother, wife, children, brothers, sisters, yes and his own life too, he cannot be my disciple. Anyone who does not carry his cross and come after me cannot be my disciple.
“And indeed, which of you here, intending to build a tower, would not first sit down and work out the cost to see if he had enough to complete it? Otherwise, if he laid the foundation and then found himself unable to finish the work, the onlookers would all start making fun of him and saying, ‘Here is a man who started to build and was unable to finish.’ Or again, what king marching to war against another king would not first sit down and consider whether with ten thousand men he could stand up to the other who advanced against him with twenty thousand? If not, then while the other king was still a long way off, he would send envoys to sue for peace. So in the same way, none of you can be my disciple unless he gives up all his possessions.”

At the very start of his first published exhortation after his election,...