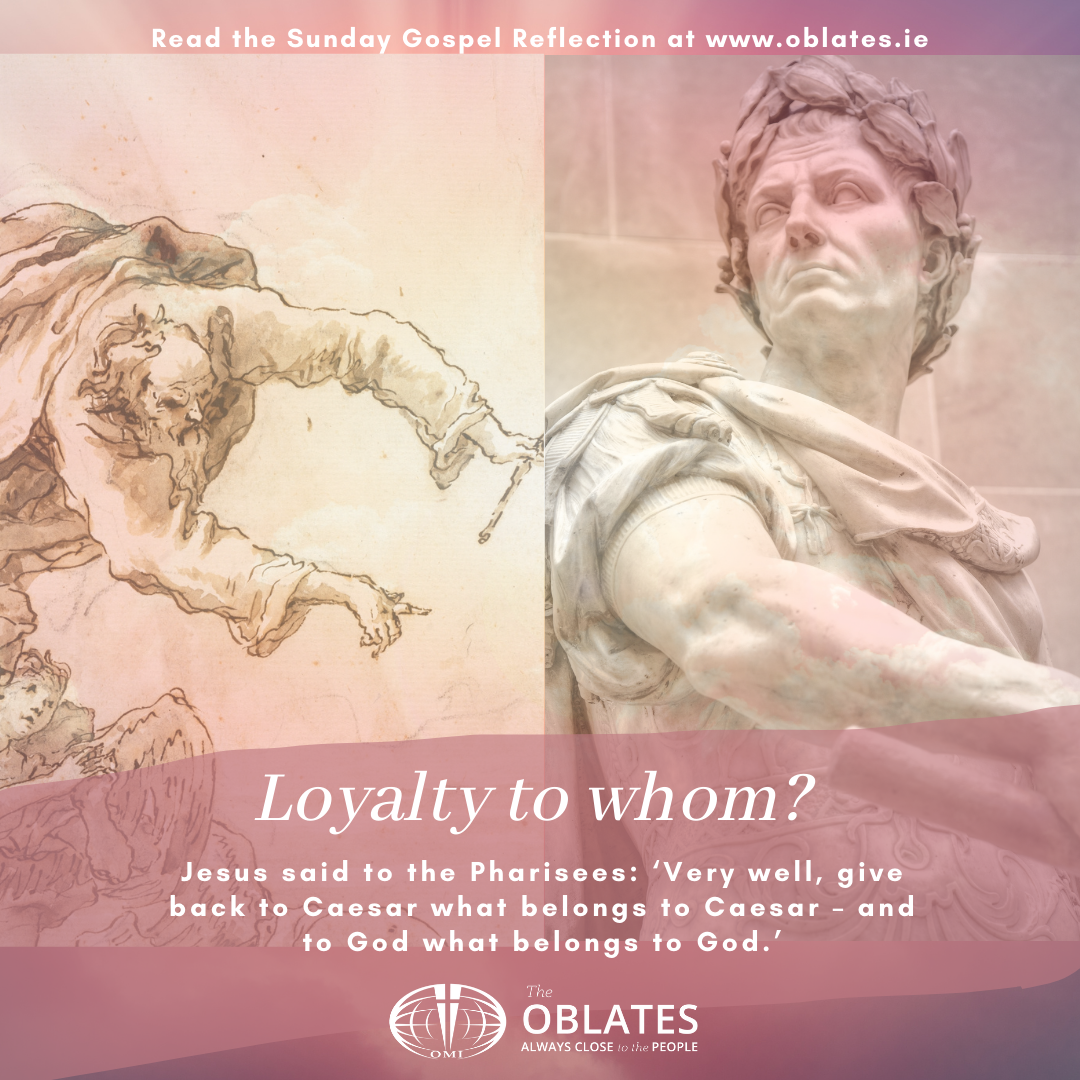 No matter to which we country we look, they all have different political parties and factions all trying to attract as many people as possible with their promises and policies. It was no different at the time of Jesus. There were many different political and religious sects all trying to claim superiority over each other. There are two such groups in today’s gospel; the Pharisees and the Herodians. The Pharisees saw them themselves as the most important religious leaders of the day. They believed that they alone were faithful to the God’s ancient covenant and mediators of Israel’s many religious laws and customs. They tolerated the Romans and their laws but did not like them. The Herodians, as their name suggests were loyal supporters of King Herod and the Romans. These two scheming groups band together to trick a common threat and their one common enemy; Jesus.

They approach him and praise him with all sorts of false compliments asking whether or not it is permissible to pay taxes to Caesar. A simple answer either way will land Jesus in trouble. If he says it is good to pay tax he might be seen to be supporting the Roman political system which the Pharisees were against. If he says the opposite he might be suggesting that the political and tax system imposed on the Jewish people should be overthrown. This would play into the hands of the Herodians. Caesar’s head was on all coins, so Jesus replies while calling both groups hypocrites; ‘Give back to Caesar what belongs to Caesar – and to God what belongs to God.’

This is not to be read or seen as a financial or political statement from Jesus, rather we are being asking to reflect upon and think about our priorities. What are and where are our concerns? Are we more interested in money than God? It is worth noting that in his answer, Jesus does not actually tell us what actually does belong to God – perhaps we each have to work this out for ourselves according to our own situation.

Maybe the challenging question that this gospel puts to each of us today is what belongs to God and what I am being called to give back to God? In reality, everything and everyone belongs to God. All created reality, including and especially each of us have been created by God and therefore belong to God. Without God nothing and none of us would exist. Perhaps the first thing we can give (back) to God is our simple and humble gratitude. As the psalm today tells and reminds us; ‘Give the Lord, you families of people, give the Lord glory and power, give the Lord the glory of his name. Bring and offering and enter his temple.’

We often misquote this line from scripture; money is the root of all evil. The actual quote tells us that it is the love of money which is the root of all evil. (1 Timothy.6.10)  There is nothing wrong with earning and spending money. It’s when we use money inappropriately and selfishly to serve ourselves and not to help others that problems arise.

Benjamin Franklin, the American economist famously said, nothing can be said to certain except death and taxes! So today, while we do our best to work, earn our living, pay our bills and taxes, may we never lose sight of the place of God in our ordinary daily lives. May we do as Jesus asks and offer God whatever we can with a willing spirit and a generous heart.

Give back to Caesar what belongs to Caesar

The Pharisees went away to work out between them how to trap Jesus in what he said. And they sent their disciples to him, together with the Herodians, to say, ‘Master, we know that you are an honest man and teach the way of God in an honest way, and that you are not afraid of anyone, because a man’s rank means nothing to you. Tell us your opinion, then. Is it permissible to pay taxes to Caesar or not?’ But Jesus was aware of their malice and replied, ‘You hypocrites! Why do you set this trap for me? Let me see the money you pay the tax with.’ They handed him a denarius, and he said, ‘Whose head is this? Whose name?’ ‘Caesar’s’ they replied. He then said to them, ‘Very well, give back to Caesar what belongs to Caesar – and to God what belongs to God.’

Each day, we email out a short video for the day based on a piece of scripture from the day’s mass.

God requests the pleasure of your company In both the Jewish and...

The Lord’s Vineyard For the third Sunday in a row, Jesus offers...

Actions speak louder than words For the second Sunday in a row,...