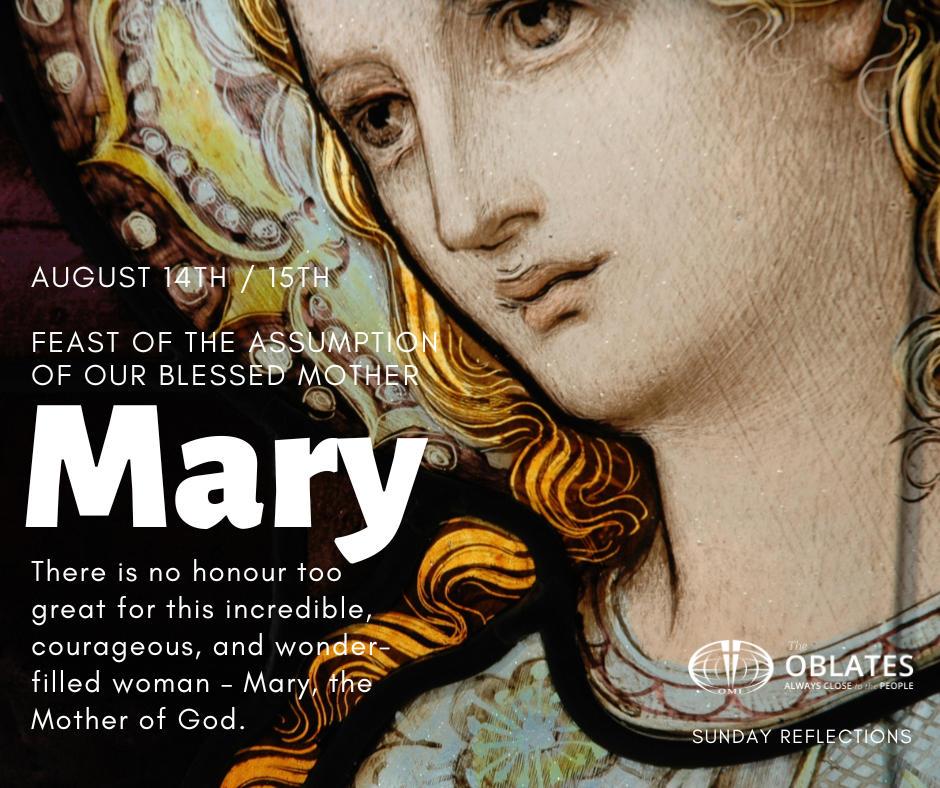 At the start of today’s Gospel we hear that when Mary arrived at the house of Elizabeth she was overjoyed and greeted Mary with these words: “…Why should I be honoured with a visit from the mother of my Lord?”

I think that this word, ‘honoured’, is at the very heart of everything the Church has ever said about Mary. We cannot ever capture her life; we cannot ever understand the relationship she had with God; we cannot ever know the loneliness, fears, doubts, joys and sorrows she carried in her heart. Nor, I believe, should we try to do so. It is enough that we do what Elizabeth did; simply and humbly honour her as “the mother of our Lord.”

I truth, we know almost nothing about Mary’s life. The Gospels are silent about her, apart from a few small, almost cameo, appearances she makes. Only Luke gives us any insight into her thoughts. The ‘Magnificat’ (today’s Gospel) – which is in fact a very early hymn or poem in praise of Mary, could never be the actual words she spoke to Elizabeth, but it must be based on the memories of those who knew her and interacted with her. In it, her faith, her courage, her gentle humility and her absolute trust in the power of God to fulfil the promises he made to his people, shine through in magnificent colour.

From the moment of Mary’s conception to the moment she returned to God her life was sacred At no time in history did ‘human’ and ‘Divine’ ever become so intertwined as in the person of Mary. No words, or art, or music, or poetry will ever even begin to express the sacred mystery she was chosen to live. Many have tried to do so in magnificent works of art or sculpture, in poetry and music, and more recently in film, and all have failed – have had to fail – to capture the absolutely unique relationship she must have had with her God.

Through the centuries the Church has given her countless titles and in popular piety her statue is carried in procession in every culture and time. Millions of people make pilgrimages to places of deep prayer where she has been reported to have appeared. Yet none of these titles, processions or pilgrimages even begin to capture her greatness.

Also through the centuries, the Catholic Church has tried to express the mystery of her life and the debt of gratitude we owe her in documents, pronouncements, and even dogmas. Intellectually, these expressions of homage are important, but we must view them, not as intellectual exercises in themselves, but as the Churches’ way of honouring her.

There are four official Dogma’s of the Roman Catholic Church concerning Mary.

The first one, and the most important one, is that Mary is the ‘Mother of God’. It is so easy for us to say that, and it seems so obvious, but it took over four hundred years for the Church to be able to state officially that Mary was, not just mother of Jesus, but also mother of God.

Remember, before anything could be said about Mary, the question, “Who was Jesus?” had to be answered. Again, it is easy for us to now say that that is obvious, but debate, disagreements and conflict lasted for three hundred years before it could be proclaimed officially that Jesus was, in fact, God, the second person of the Blessed Trinity, and that he was also fully human, born of Mary.

Only after this was declared could Mary’s part in his conception and birth be considered. In time this led to the formal declaration the Mary was indeed ‘Mother of God’.

Think about that for a few moments and you will see just how huge this statement is. Mary, a human woman, brought into the world, gave birth to, the God who created everything that is!

But how does one even begin to pay homage to the woman who gave the ‘Son of God’ to us? The simple answer is, “we can’t”! However we can try. The other three Dogmas – the perpetual Virginity of Mary, her Immaculate Conception and today’s Feast, the Assumption of Mary into Heaven – are all honours the Church bestows on her as “Mother of God.”

Getting into arguments about the intellectual intricacies of any of these Dogma’s might be interesting but it achieves nothing and actually pulls us away from the woman we honour – Mary, Mother God.

For example, we might ask about today’s Feast, “Did Mary actually die and was then resurrected and taken bodily to Heaven or does Assumption imply that she was miraculously taken to Heaven before death?”

To that question I answer, “Interesting as an intellectual exercise, but it makes absolutely no difference to the honour I give to this great woman.”

All of the Dogma’s simply say:

I can say that I don’t understand any of these dogmas, and that I enjoy pondering and debating them with anyone who wants to do so. But I can also say that these honours, given to Mary by the Church, make perfect sense to me.

There is no honour too great for this incredible, courageous, and wonder-filled woman – Mary, the Mother of God.

The Almighty has done great things for me

Mary set out and went as quickly as she could to a town in the hill country of Judah. She went into Zechariah’s house and greeted Elizabeth. Now as soon as Elizabeth heard Mary’s greeting, the child leapt in her womb and Elizabeth was filled with the Holy Spirit. She gave a loud cry and said, ‘Of all women you are the most blessed, and blessed is the fruit of your womb. Why should I be honoured with a visit from the mother of my Lord? For the moment your greeting reached my ears, the child in my womb leapt for joy. Yes, blessed is she who believed that the promise made her by the Lord would be fulfilled.’
And Mary said:
‘My soul proclaims the greatness of the Lord
and my spirit exults in God my saviour;
because he has looked upon his lowly handmaid.
Yes, from this day forward all generations will call me blessed,
for the Almighty has done great things for me.
Holy is his name,
and his mercy reaches from age to age for those who fear him.
He has shown the power of his arm,
he has routed the proud of heart.
He has pulled down princes from their thrones and exalted the lowly.
The hungry he has filled with good things, the rich sent empty away.
He has come to the help of Israel his servant, mindful of his mercy
– according to the promise he made to our ancestors –
of his mercy to Abraham and to his descendants for ever.’
Mary stayed with Elizabeth about three months and then went back home.

Introduction: Today’s Gospel is maybe more important than we might think at...