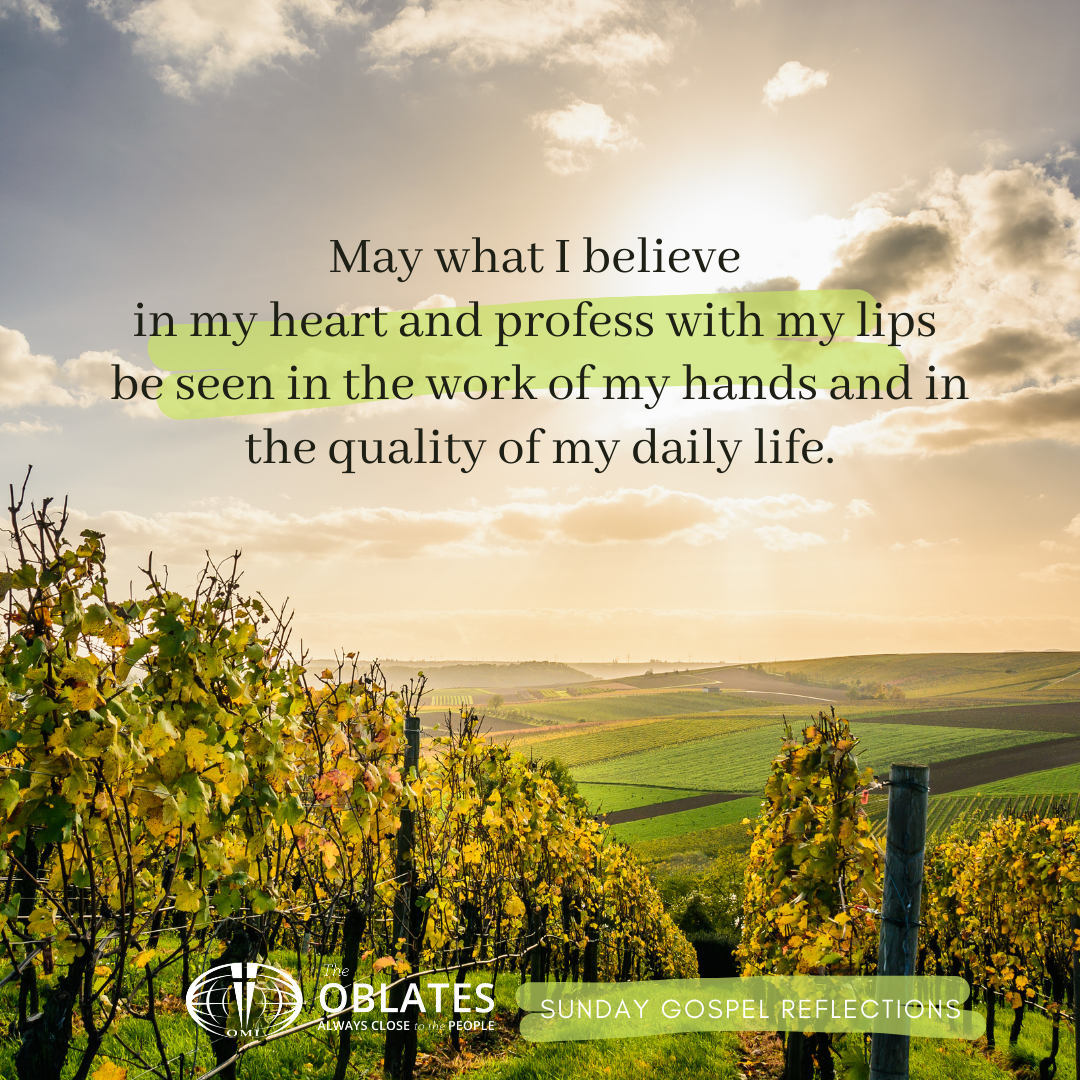 For the second Sunday in a row, Jesus speaks to and teaches us through a parable. The point and truth of a parable is not based on whether it is true or really happened. The purpose of a parable is that we learn something about the reality of Kingdom of God and our own personal response to Jesus’ invitation to be his disciple today, here and now. Again this Sunday Jesus uses the rich image of the vineyard.  At the time of Jesus a vineyard was a prized possession. It spoke of wealth, riches and prestige. It was a precious treasure to own and Jesus naturally used it to speak about the reality of God’s Kingdom. It is a fairly short and simple, yet very challenging parable.

A man has two sons. He asks the first one to go to the vineyard to work. His immediate response is a very definite no! But for some reason, which we do not know, he later changes his mind and does in fact go the vineyard. On being asked, the second son politely agrees to his father’s request, but in fact does not do what he was asked; he does not go to the vineyard. As is often the case, Jesus is telling this parable to the chief priest and the elders who had a habit of saying one thing and doing the very opposite! Jesus asks them, ‘Which of the two did the fathers will?’ Correctly they answer, ‘The first.’ Not content with their response, Jesus confronts them with these words of warning, ‘…tax collectors and prostitutes are making their way into the Kingdom of God before you.’ Jesus often accused them of being hypocrites. This word is Greek in origin, meaning ‘actor.’ The person wore a mask which allowed them to become someone else. This also allowed them to say and do things for which they believed they were not responsible.

The danger for us is that we leave this parable in the past believing that is has nothing to say to us or teach us. Sometimes when we are listening to someone and doubt them, we say they are all talk! Sometimes, when we say we are following Jesus, we too are all talk and our actions do not match our words or intentions. Like the second son, we say one thing but then do the very opposite.

This short parable asks us to be like the first son; he not only changed his mind, he also had a change of heart. As we try our best in our ordinary daily lives to follow Jesus, we are called to make decisions and choices that will help us to follow him. Are we like the second son; are we all talk, saying the rights words but doing the opposite or are we like the first son who on reflection had a change of heart and did the right thing? The choice every day in countless small ways is ours to make.

In another part of Matthew’s gospel, while Jesus is speaking to and warning the chief priest and elders he says, ‘Not everyone who calls me ‘Lord, Lord’ will enter the Kingdom of heaven, but only those who do the will of my Father in heaven.’ Just as it was with the Scribes and Pharisees, there is always the danger that today I will say one thing and then do the very opposite. It is true; my actions do speak louder than my words! As I try to follow Jesus today, what do my actions say about me?

May what I believe in my heart and profess with my lips be seen in the work of my hands and in the quality of my daily life.

Jesus said to the chief priests and elders of the people, ‘What is your opinion? A man had two sons. He went and said to the first, “My boy, you go and work in the vineyard today.” He answered, “I will not go,” but afterwards thought better of it and went. The man then went and said the same thing to the second who answered, “Certainly, sir,” but did not go. Which of the two did the father’s will?’ ‘The first’ they said. Jesus said to them, ‘I tell you solemnly, tax collectors and prostitutes are making their way into the kingdom of God before you. For John came to you, a pattern of true righteousness, but you did not believe him, and yet the tax collectors and prostitutes did. Even after seeing that, you refused to think better of it and believe in him.’

God requests the pleasure of your company In both the Jewish and...

The Lord’s Vineyard For the third Sunday in a row, Jesus offers...

Actions speak louder than words For the second Sunday in a row,...