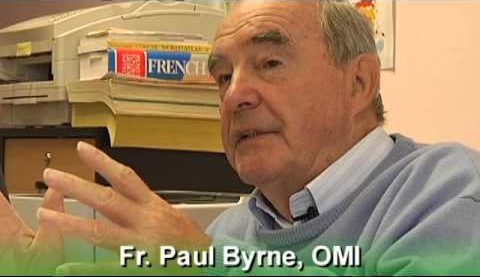 This evening at 7.30pm at the Oblates, Tyrconnell Road in Inchicore, Dublin, will host a tribute evening to honour the late Father Paul Byrne OMI (8 August 1932 – 4 December 2018) who served as chaplain of, and advocate for, the Irish emigrant community in Britain from 1965 – 2003).

Tributes will be led by Dr Patricia Kennedy author of Welcoming the Stranger, Irish Migrant Welfare In Britain since 1957.  The evening’s guest speaker will be social entrepreneur Norah Casey and attendance will include lay, religious and clerical friends and colleagues of the late Father Byrne. The tribute coincides with the relaunch of Ultan Cowley’s seminal book The Men Who Built Britain which includes a newly added dedication to the chaplains who served the Bishops’ Commission for Emigrants.

Ahead of the tribute evening, the chair of the Bishops’ Council for Emigrants, Bishop Denis Brennan said, “I strongly support the tribute evening to honour Father Paul Byrne who, with great passionate and conviction, led a deeply impactful missionary life and will be remembered by a great many people for the transformative change he brought about in the lives of Irish emigrants over many decades.

“Father Paul’s work in voluntary housing in Birmingham and London transformed the sector.  He was awarded an OBE for his inspirational leadership on behalf of those without a home. As director of the Bishops’ Council for Emigrants, he quickly set about addressing the exclusion and isolation felt by many Irish emigrants. In 1998, he commissioned a report on the issues which, in turn, led to an Irish government Policy Task Force on emigration, recommendations of which were accepted by government. The ultimate result of Father Paul’s endeavours was a major increase in funding for Irish emigrant services overseas; an acknowledgment of the outstanding service given by Church agencies to Irish migrants around the world; and, the formation of a dedicated unit within the Department of Foreign Affairs and Trade which continues today. This was no mean feat.”

“On a personal note” added Bishop Brennan, “I have vivid memories of a visit by Father Paul to us at the House of Missions in Enniscorthy many years ago when he visited at the request of Archbishop McQuaid to enlist our help in outreaching to the many Irish people who worked on the motorways in Britain at that time.  His imparted knowledge and wisdom during that visit were symptomatic of his genuine care for our own abroad – with whom he was not only very familiar – but to whom he acted as good shepherd and guide.”

Bishop Brennan concluded, “Alongside Father Tim O’Sullivan, Father Paul was closely involved in the establishment of many of the Irish pastoral and welfare centres in major US cities, and which continue to serve the most vulnerable of our Irish immigrant communities. Today, the life and ministry of Father Paul Byrne acts as a template to all who embrace the social teaching of the Church and who are driven to make our world a better place for all.”

Paul Byrne was born in Inchicore, Dublin on 8 August 1932, the first child to John and Lavinia Byrne (née Nightingale). After secondary school – at CBS, Synge Street and then Belcamp College – Paul entered the Oblate novitiate at Ardagh, Co Limerick in September 1951. Four years later, after completing a BA at UCD, he began theological studies at the Oblate Scholasticate in Kilkenny, where he was ordained priest on 21 September 1958.

The plight of Irish emigrants in Britain was brought to the attention of Archbishop John Charles McQuaid in the mid-1950’s by a group of Columban priests working in Manchester.  Following their appeal, and the obvious need, the Irish Bishops’ Conference asked that priests be provided to minister to meet the pastoral needs of this wave of Irish emigrants.  Initially the work involved celebrating the Sacraments, however more and more attention was paid to the living and working conditions of these emigrants, many of whom were on the verge of destitution.  The response was formalised by the Bishops’ Conference in 1957 when it set up the Irish Chaplaincy Scheme in Britain.  This response was replicated in the United States in the mid-eighties when large numbers of young Irish left Ireland in the hope of a better and brighter future there.

My experiences of working in the baths at Lourdes I have had...

THE LETTER OF THE SUPERIOR GENERAL ON THE 194TH ANNIVERSARY OF THE...