“We are all children of God – sisters and brothers of Jesus Christ”.
Friends of St Eugene – St. Anne’s Parish, Birmingham

What next for St. Anne’s? was the remark in the Sunday newsletter, ‘come along to a meeting in the presbytery on Monday night at 7pm’. Everyone was curious to know what was happening, word had spread quickly, as between 30-40 people turned up for the meeting.

For the past 2 years, Mgr. Pat Browne and a few Friends of St. Eugene and some other parishioners had joined members of the Redditch St. Vincent De Paul conference, going into the City Centre at night, befriending and providing food and hot drinks for some of the ever increasing number of homeless people who squat and sleep on the streets.

A number of meetings and training sessions followed during the Autumn, with 40 volunteers signing up to take part. Fr. Pat found just the right man to co-ordinate the project, in Eugene Renehan: a local man whose family are well known parishioners of St. Anne’s. He had spent some time sleeping on the streets and said that it was the scariest time of his life. He liased with Birmingham Churches Lead co-ordinator, David Begg, and with his cheerful optimism, which kept all involved in good spirits throughout. 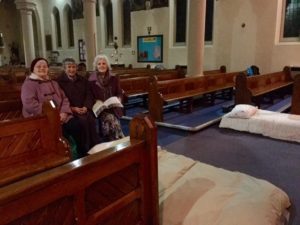 Teams of volunteers quickly formed to take responsibility for the range of jobs which needed to be done: they included getting beds and bedding, making beds, managing laundry, shopping, cooking meals, washing, providing social engagement and support as well as managing communication across the network of 40 volunteers who live all over the city. The quality which marked each contribution was the boundless energy and generosity along with the belief that each and every one of us, guests and volunteers, stand equal in the eyes of God. To quote St. Eugene: “We are all children of God – sisters and brothers of Jesus Christ”.

During the evenings, some volunteers started at 5pm and made up the beds in the church and another group prepared the food. At 7pm, the guests arrived, they were collected at a pre-arranged point and brought by a mini-bus. All were known to the Lead co-ordinator and were familiar with the ground rules, i.e. no alcohol on the premises and no smoking inside. 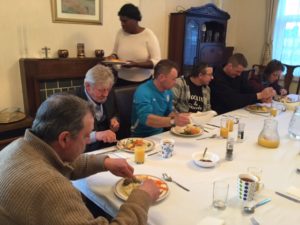 During the evening, they dined in the presbytery dining room at the long table, which had all the finesse of parish houses from a bygone era. As an integral part of the socialising on the first evening, a few volunteers joined the guests at table. It was not an easy relaxed dining experience on that evening. The guests had felt strange and unfamiliar, perhaps for some a painful reminder of their earlier happy family meals.

At the outset, we felt that sleeping in the church might be uncomfortable for them, but how wrong and humbled we were as they respectfully arranged their nests for the night. Some genuflected, many blessed themselves, one lit a candle at Our Lady’s altar, one stood with their hands joined in front of the Sacred Heart statue; another settled by the statue of St. Anne’s and remarked that the saints were looking down on him, and another said about the sanctuary light on the altar that: ‘the Lord was keeping watch on him’.

As the weeks passed, the men and the volunteers had relaxed. As they arrived each Monday, they were joyful and happy. We learnt their names and they learnt our own. Meal times became relaxed with laughter and confident requests were made for second helpings. On the fifth evening, Archbishop Bernard and another priest dropped in and mingled and chatted to the guests and volunteers. 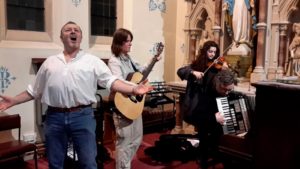 After the evening meals, some went out into the yard to smoke, others played cards and dominoes; some rested and two of them had read novels. On the fourth evening, a young man who had joined the group for the first time, played a guitar loaned to him by one of the parish music group who had just dropped in for the evening. Despite language barriers, they talked and played as they sat on the steps of Our Lady’s altar. He joined the volunteers at 7.30 Mass the next morning. The following week, the youngest member of our choir and her father played polish polkas and waltzes which had the guests and volunteers dancing in the aisles and the young man playing the guitar. 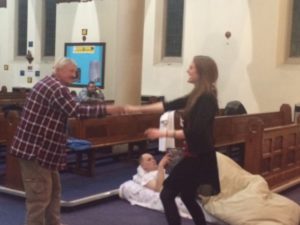 Friends of St. Eugene and other volunteers have spoken about how they have learnt anew, that one wrong twist of fate or wrong turn in life can lead to a lonely life on the streets. In today’s economy, that possibility is all the more likely. The need for action is so urgent. We believe that the Catholic communities of St. Anne’s and St. Catherine’s have been enriched by the experience.

A plenary meeting has been planned and volunteers from St. Anne’s will join other city teams in a service of thanksgiving. Throughout the whole project, our parish community has supported in practical ways but most crucially through their daily prayer for success and safety for all involved. Our hope is that other parishes will participate in the Birmingham Churches Night Shelter scheme next year.