In the gospel today, Jesus uses the most ordinary of words to talk about and describe the Kingdom of God. Using the language of farming, he says that God’s Kingdom grows like a seed that is sown. How the seed grows slowly in own its time, the farmer does not know – but slowly and surely it does. In a second parable Jesus says that kingdom is like the mustard seed, which is the smallest of seeds. ‘Yet once it is sown it grows into the biggest of trees and puts out its branches so that birds of air can find shelter in its shade.’

It is a very human quality and trait to want our projects to succeed. We often convince ourselves or allow ourselves to be convinced by others than more is better than less, faster is better than slower and bigger is better than smaller. The gospel today however challenges this assumption. Jesus tells us that the Kingdom of God has a small and seemingly insignificant beginning and that it grows slowly and perhaps sometimes in ways that we can neither see nor appreciate.

When a seed is sown in the ground or in a flower pot, we cannot rush its growth. We can water, nurture and nourish it, but it will grow in its own way and in its own time. When it is sown what is required of us patience and perseverance. The same can be said of God’s Kingdom. We can do all we can to build up and promote its growth, but it is God who will bring it to fruition and fulfilment, not us. We have our part to play, but it is God Kingdom, not ours. As St. Paul tells us; ‘the one who sows and the one who waters do not really matter…it is God who makes the plant grow. There is no difference between the one who sows and the one who waters; we are partners working together for God.’ (1 Cor. 3.7).

The image of the mustard seed is important. It is the smallest of seeds, yet when sown and grown fully, it becomes the most majestic of trees. Jesus is telling us that it is the same with the Kingdom of God. It begins with small, silent and perhaps seemingly invisible seeds. Even the most spectacular of journeys begins with one small step and great things often have their origins in the most humble and ordinary of ways.

You and I are called to be agents of change in the world today who sow seeds of God Kingdom. Each small act of kindness, generosity and compassion is a seed of the Kingdom. Every word spoken with love gentleness and encouragement is a seed of the Kingdom. How we act and speak has the potential to harm or to hurt others. When we live our daily lives as followers of Jesus with concern for others, we are playing our part in sowing seeds of God’s kingdom that will grow in ways that could never imagine and perhaps will never see. Let us never underestimate the power we have to help and influence others through our actions and our words. In truth, each of us is called be people who sow seeds that will grow, flourish and bloom into God’s Kingdom. Like any seed that is sown, this will happen in God’s time and God’s way; not ours. 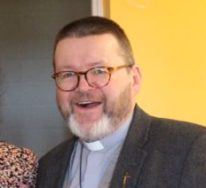 Patrick Kavanagh, an Irish poet said that God is in the bits and pieces of every day. God’s Kingdom is happening all around us in seemingly small and invisible moments and experiences of our daily lives. We are called to notice and nurture them as best we can.

Who has sown a seed of God’s Kingdom in your life recently? What seeds of kindness, forgiveness and generosity can you sow in someone’s life this week?

Jesus said to the crowds: ‘This is what the kingdom of God is like. A man throws seed on the land. Night and day, while he sleeps, when he is awake, the seed is sprouting and growing; how, he does not know. Of its own accord the land produces first the shoot, then the ear, then the full grain in the ear. And when the crop is ready, he loses no time: he starts to reap because the harvest has come.’
He also said, ‘What can we say the kingdom of God is like? What parable can we find for it? It is like a mustard seed which at the time of its sowing in the soil is the smallest of all the seeds on earth; yet once it is sown it grows into the biggest shrub of them all and puts out big branches so that the birds of the air can shelter in its shade.’
Using many parables like these, he spoke the word to them, so far as they were capable of understanding it. He would not speak to them except in parables, but he explained everything to his disciples when they were alone.
Sign up here for our daily emails:

Gospel Reflection for May 16th - The 7th Sunday of Easter