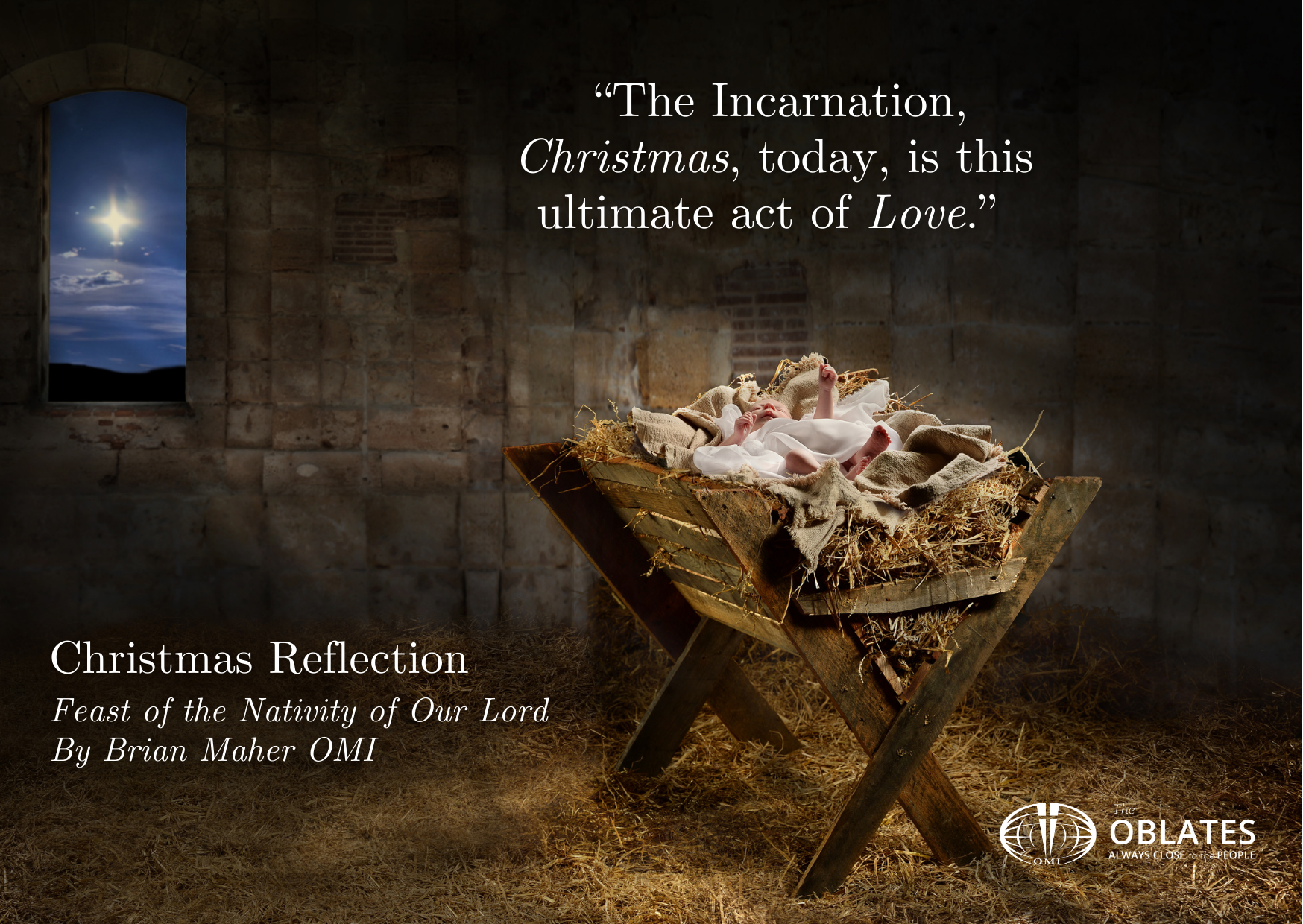 “At various times in the past and in various different ways, God spoke to our ancestors through the prophets; but in our own time, the last days, he has spoken to us through his Son….”  (Hebrews 1:1)

This sentence, the start of the 2nd Reading of today’s Mass may not seem as romantic as the Crib scene we are used to, and it may not be as dramatic as choirs of angels singing in the Heavens but, if you want the entire story of Christmas in one sentence, this is it.

The Old Testament, rather unfairly in my view, gets a bad press as being unhistorical, violent, contradictory, and presenting a cruel, jealous, punishing God.

What those who think this fail to appreciate, however, is that the Old Testament, in all its poetic wonder and beauty, is no more or no less than a group of people (People of Israel) coming to know and then trying to develop a relationship with a ‘new’ and personal God.

All of us know from our own experience how long it takes to develop a relationship with another person, and we also know the ups-and-downs, misunderstandings, mistakes, joys and sorrows, arguments and restarts that go into making and developing healthy human relationships.

Is it any wonder, then, that a people trying to articulate their developing relationship with God would make mistakes, have misunderstandings, and experience ups-and-downs as that relationship grew? For me, these very misunderstandings and mistakes are what point to the health and veracity of the relationship. Neither side gives up or abandons the other. No matter how bad the mistake, no matter how great the betrayal, they begin again.

God created all things in the Universe out of love, asking nothing in return.

God created us in his own image and likeness out of love, so that we could share and experience that love. God asked nothing in return but humble acceptance of that gift.

We get angry at times …… so God must get angry too!

When wronged or hurt we seek retribution and demand that the one who wronged us is punished …… God must be like that too!

Because it is the wrong starting point it is a problem which keeps recurring.

Time and time again through the Old Testament, God tells his people that he LOVES them (even more than a mother loves a new born baby!) and time and time again they get it wrong. “There must be more…” they say, and they sink themselves in rules and laws and regulations until the meaning of God’s love for them is lost.

Prophet after prophet comes to them with the same message of LOVE but they keep missing it.

Until finally, instead of speaking to his people; instead of telling them how much he loves them he chooses to become one of them, no longer telling them but showing them.

The Incarnation, Christmas, today, is this ultimate act of Love.

We talk with admiration about a person who puts their “money where their mouth is” and we say that “actions speak louder than words.”

God’s ultimate act of Love for us was coming among us to SHOW us what Love is – every action of his life, every word from his mouth, every time he healed or forgave or welcomed the outcast or fed the hungry – in each one he SHOWS us love in action.

“At various times in the past and in various different ways, God spoke to our ancestors through the prophets; but in our own time, the last days, he has spoken to us through his Son….”

The Gospel this morning, while it doesn’t include the more traditional imagery of Matthew and Luke, presents us with what is, perhaps, the deepest understanding of the mystery we celebrate.

Almost hidden within the verses we come across a short sentence which, even now, I find difficult to read or think about without tears coming to my eyes.

That wondrous and immense God… is the God born today in Bethlehem.

The child in the crib, the child embraced in the love of Joseph and Mary, is God!

What greater love is possible than that our God comes among us, so that we can know how much we are loved.

The infant we see in the crib today is our God crying out to us, “Look…Look, I am here with you, among you, recognise me… receive me… please!”

This is our challenge this Christmas and every Christmas.

It is not a challenge which should put us off enjoying our Christmas dinner. Rather, it is a realisation which should make us enjoy it even more.

The Resurrection of that same child from the dead thirty-three years later shows us (not tells us, shows us!) that love triumphs even over death.

And so we, you and I, thanks to the child born today can…should…must celebrate and be joyful.

Have a Happy and Peaceful Day.

The Word was made flesh, and lived among us

In the beginning was the Word:
and the Word was with God
and the Word was God.
He was with God in the beginning.
Through him all things came to be,
not one thing had its being but through him.
All that came to be had life in him
and that life was the light of men,
a light that shines in the dark,
a light that darkness could not overpower.
A man came, sent by God.
His name was John.
He came as a witness,
as a witness to speak for the light,
so that everyone might believe through him.
He was not the light,
only a witness to speak for the light.
The Word was the true light
that enlightens all men;
and he was coming into the world.
He was in the world
that had its being through him,
and the world did not know him.
He came to his own domain
and his own people did not accept him.
But to all who did accept him
he gave power to become children of God,
to all who believe in the name of him
who was born not out of human stock
or urge of the flesh
or will of man
but of God himself.
The Word was made flesh,
he lived among us,
and we saw his glory,
the glory that is his as the only Son of the Father,
full of grace and truth.
John appears as his witness. He proclaims:
‘This is the one of whom I said:
He who comes after me ranks before me
because he existed before me.’
Indeed, from his fullness we have, all of us, received –
yes, grace in return for grace,
since, though the Law was given through Moses,
grace and truth have come through Jesus Christ.
No one has ever seen God;
it is the only Son, who is nearest to the Father’s heart,
who has made him known.
Sign up here for our daily emails:

At the very start of his first published exhortation after his election,...