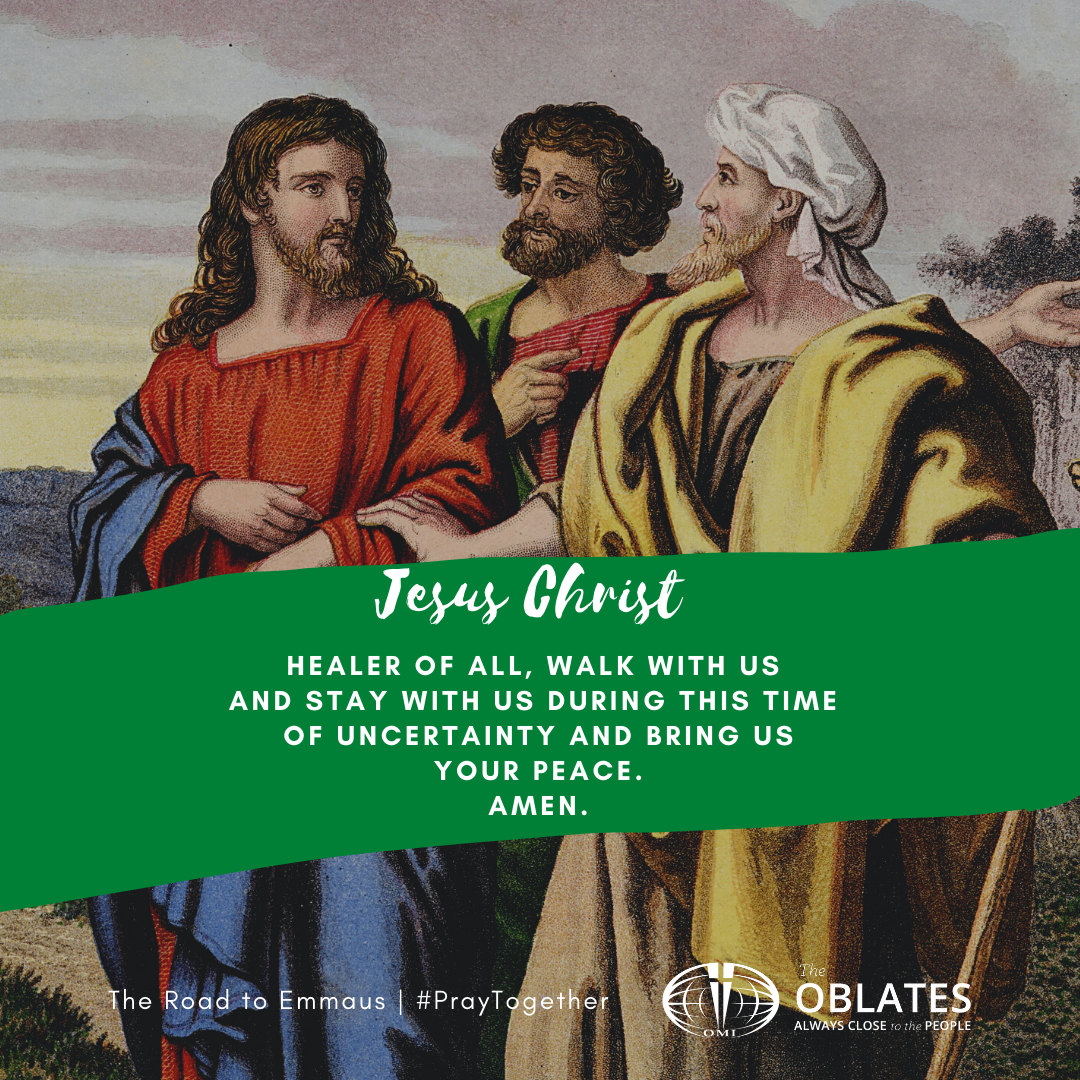 The Risen Lord walks with us

The gospels that we are hearing and reading during Easter tell us about the people who met the risen Jesus. In many ways these are very ordinary people in equally ordinary situations.

Mary Magdalene met Jesus at the tomb and thought he was the gardener. On one occasion, Jesus met his friends while they were fishing and he cooked breakfast for them on the beach! In todays gospel, Jesus appears to two disciples while they are walking away from Jerusalem towards Emmaus.

They are walking away from the place of disaster and disappointment.

These two are leaving Jerusalem after they saw Jesus being betrayed, denied, condemned and crucified. They saw him die and being buried. We can only imagine their despair, disappointment and disorientation. When these two meet Jesus, he simply asks them what they are talking about.

He wants to know what has happened and what is happening to them. They tell him all the things they had seen and experienced. As they speak to Jesus, he walks with them and listens to them. He becomes their companion on the journey.

He does not walk behind or in front of them; he walks by their side. Difficult as these days are for all of us, we are being called and invited to truly believe that the Risen Jesus is walking with us and listening to as we tell him all the things that are happening to us. In your prayer and conversation with Jesus, what are you telling him today?

Towards the end of the gospel, Jesus was going to carry on walking, but they asked him stay with him for a meal. He waited to be asked to stay. Perhaps today as individuals and as families, we too can ask Jesus to stay with us. If we ask him, he will not refuse us. We are not alone – the Risen Lord is with us; walking with us and listening to us.

Jesus Christ, you travelled through towns and villages curing every disease and sickness. At your word those who were sick were made well again. Come now to our aid in the midst of the global spread of the Coronavirus, that we may experience your healing love.

Jesus Christ, healer of all, walk with us and stay with us during this time of uncertainty and bring us your peace. Amen.

They recognised him at the breaking of bread

Two of the disciples of Jesus were on their way to a village called Emmaus, seven miles from Jerusalem, and they were talking together about all that had happened. Now as they talked this over, Jesus himself came up and walked by their side; but something prevented them from recognising him. He said to them, ‘What matters are you discussing as you walk along?’ They stopped short, their faces downcast.

Then one of them, called Cleopas, answered him, ‘You must be the only person staying in Jerusalem who does not know the things that have been happening there these last few days.’ ‘What things?’ he asked. ‘All about Jesus of Nazareth’ they answered ‘who proved he was a great prophet by the things he said and did in the sight of God and of the whole people; and how our chief priests and our leaders handed him over to be sentenced to death, and had him crucified. Our own hope had been that he would be the one to set Israel free. And this is not all: two whole days have gone by since it all happened; and some women from our group have astounded us: they went to the tomb in the early morning, and when they did not find the body, they came back to tell us they had seen a vision of angels who declared he was alive. Some of our friends went to the tomb and found everything exactly as the women had reported, but of him they saw nothing.’
Then he said to them, ‘You foolish men! So slow to believe the full message of the prophets! Was it not ordained that the Christ should suffer and so enter into his glory?’ Then, starting with Moses and going through all the prophets, he explained to them the passages throughout the scriptures that were about himself.
When they drew near to the village to which they were going, he made as if to go on; but they pressed him to stay with them. ‘It is nearly evening’ they said ‘and the day is almost over.’ So he went in to stay with them. Now while he was with them at table, he took the bread and said the blessing; then he broke it and handed it to them. And their eyes were opened and they recognised him; but he had vanished from their sight. Then they said to each other, ‘Did not our hearts burn within us as he talked to us on the road and explained the scriptures to us?’
They set out that instant and returned to Jerusalem. There they found the Eleven assembled together with their companions, who said to them, ‘Yes, it is true. The Lord has risen and has appeared to Simon.’ Then they told their story of what had happened on the road and how they had recognised him at the breaking of bread.

Last Sunday was Pentecost Sunday, the last day of the Easter season....

Gospel Reflection for Sunday May 31st 2020

The Missionary Church is born It is often said that William Shakespeare...

Gospel Reflection for Sunday 24th of May 2020

You are my witnesses Today, in union with the world wide church,...

Gospel Reflection for Sunday 17th of May 2020

Love me and love one another On Holy Thursday night we celebrate...

Gospel Reflection for Sunday 10th of May 2020

Jesus is the Way, the Truth and the Life  Although we ‘celebrated’...

Gospel Reflection for Sunday 3rd of May 2020

Following Jesus and listening to him The theme and message of the...