October 27th : Gospel Reflection for this Sunday
The 30th Sunday in Ordinary Time 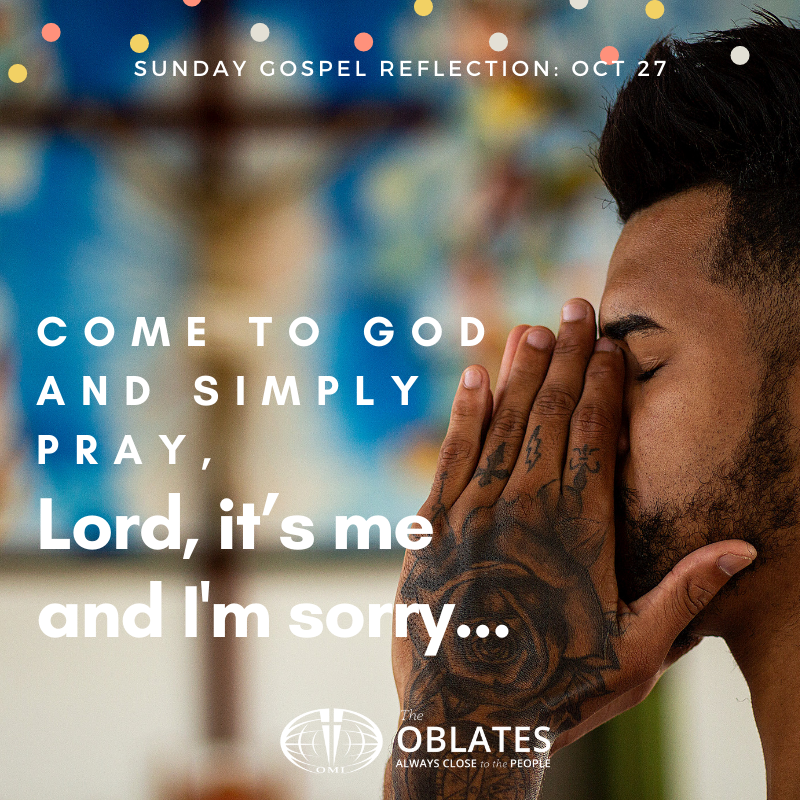 Lord, have mercy on me a sinner

There is a story about the great writer Oscar Wilde. He was once asked what he thought of another writer. His response was; he is a self-made man who admires his maker! This might be a very suitable and accurate description of the Pharisee in today’s gospel. Before Jesus tells the parable, we are told the very reason he tells it; some people prided themselves in being virtuous and who despised everyone else. Strong words indeed!

Two men go to the Temple to pray. One is a Pharisee, the other is a tax-collector; two very different sorts of Jewish people. The Pharisees is one of the ruling class. They control and interpret the Jewish Law for the rest of the people. They consider them themselves to be above and better than everyone else. We know from the other Gospels that many times Jesus publicly challenged and criticised them for how they treated others; especially the poor and sick; those they considered to be sinners. But they thought that they themselves were perfect. The tax collector was different altogether. Like Matthew and Zacchaeus, he was a Jew who worked for the Romans by collecting taxes from other Jews. He was hated and despised because he stole from his own people. He was treated as an outcast and seen a sinner.

The Pharisee marches all the way up to front so that he can be seen and heard by all. His so-called ‘prayer’ is litany of how great he thinks he is. He even dismisses and condemns the tax collector when he says; ‘I thank you God that I am not like this tax collector here.’ But in fact he is not praying at all; he is talking to himself. He simply boasting and showing off; he is talking to himself about himself; he is not talking to God. He is neither honest or humble.

The tax collector on the other hand stands some distance away, perhaps in the shadow of the door way. He doesn’t even raise his eyes; he humbly and honestly prays from the depth of his heart, ‘Lord, have mercy on me a sinner.’ This is real and genuine prayer.

The mistake to make would be to think that this just about the tax collector’s guilt and sin. It is not that negative. The tax collector knows and deeply believes two things about himself; he is a sinner, and that he is also loved and forgiven by God. He is in fact a loved sinner. He is not afraid of God. He is honest with both God and himself. He approaches God with courage, humility, and faith. He is not trying to be anyone other than who he is. He knows he is sinner, but also knows that he is loved and forgiven by God.

How do I approach God when I pray? Are there times when I am like the Pharisee? Can I pray for the honesty and humility of the tax collector? Can I come to God and simply pray, Lord, it’s me and I’m sorry.

Two men went up to the temple to pray; two contrasting approaches to God

Jesus also told this parable to some who trusted in themselves that they were righteous and regarded others with contempt: “Two men went up to the temple to pray, one a Pharisee and the other a tax collector. The Pharisee, standing by himself, was praying thus, ‘God, I thank you that I am not like other people: thieves, rogues, adulterers, or even like this tax collector. I fast twice a week; I give a tenth of all my income.’ But the tax collector, standing far off, would not even look up to heaven, but was beating his breast and saying, ‘God, be merciful to me, a sinner!’ I tell you, this man went down to his home justified rather than the other; for all who exalt themselves will be humbled, but all who humble themselves will be exalted.”

The tiny mustard seed and the yeast In the gospel last Sunday,...

The seed is the Word of God Jesus was a great story...

Come to me all you who are overburdened The main invitation that...

The challenge of being a follower of Jesus I share the following...

Do not be afraid Of what are you afraid? What fills you...

The Body and Blood of Jesus – Corpus Christi Separated though we...