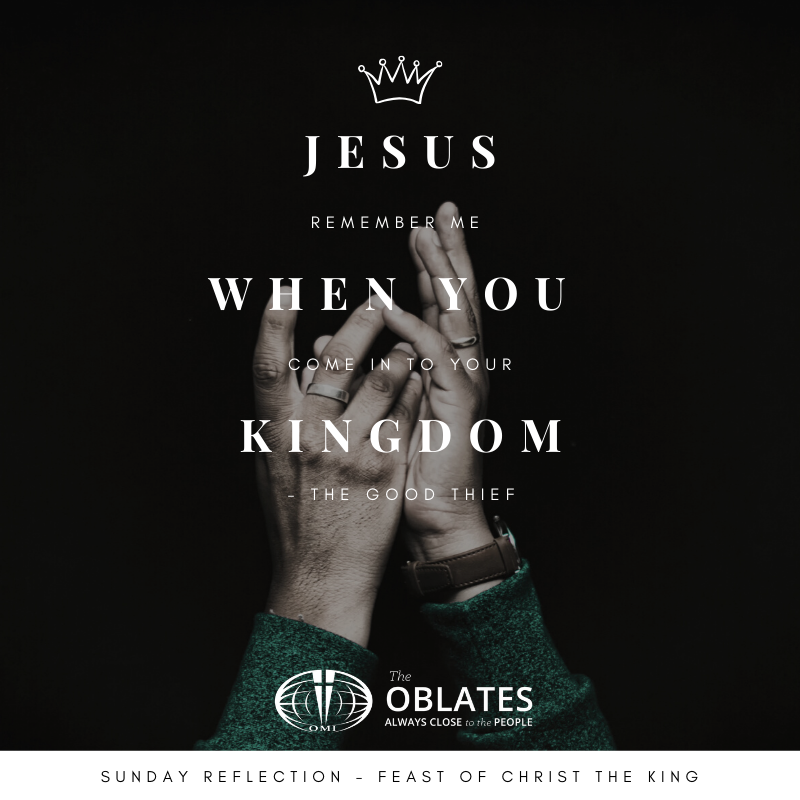 His Kingdom will have no end

If one looks through any good history book, one will discover that at some time, most countries were ruled by royalty of one sort of another. In many cases these queens, kings and monarchs ruled by ‘divine right’. They believed that they were royal rulers because it was God’s wish and will for them. Many inherited their throne, power and authority from their ancestors. Through war and battles they advanced their kingdom. They ruled with the help of their generals and armies. Many of them ruled through fear and control, demanding loyalty and respect rather than earning them. Some we could even properly call ‘dictators’ rather than leaders. They all assumed their reign and ruling would never end. How history has proved them wrong!

Today, as the Universal Church, we celebrate the Feast of Christ the King. The gospel today is not the one from John’s Gospel where Jesus says to Pontus Pilate, ‘Yes, I am a king.’ Strangely, but beautifully the gospel today is from Luke and tells us of Jesus’ Crucifixion. Jesus is slowly dying on the cross; on either side of him are two thieves. One of them verbally abuses Jesus; the other admits and acknowledges his guilt and utters the profound prayer request, ‘Jesus, remember when you come into your kingdom.’ To which Jesus replies, ‘I promise you, today you will be with me in paradise.’ So the first person to enter the Kingdom of God with Jesus is a repentant thief, not a king, a general, a queen or some other important person. There is hope for all of us!

Jesus did say that his Kingdom was not of this world. The true king of a Kingdom not of this world offers repentance, forgiveness and eternal life to those who ask for it. The Kingdom of God is not based on power, wealth, prestige or controlling people by royal command or force. God’s Kingdom, which Jesus proclaims is based on love mercy, service, justice and reconciliation. Jesus is a King, but he doesn’t and cannot make us follow him. He calls us by our name and invites us to follow him freely out love because we want to.

While Jesus dies on the cross, his enemies shout at him to save himself. But he is not this sort of powerful King. Surely, this Jesus, the Christ who raised the dead, healed the sick, walked on water and forgave sinners was capable of saving himself. But he doesn’t. The Kingship of Jesus is not about saving himself, self-preservation, or his own glory and power. Instead, in Jesus the King, we witness and share in his life and love being poured out freely and totally for others.

If we call ourselves Christian and follow Christ the King, then we are also called to follow the way he lived.  Jesus the King, came to serve, not to be served. He came to heal and forgive us. He came to offer the gift of eternal life, the very same gift he gave to the repentant thief.

As we end this current liturgical year, may we honour and reverence Christ the King of the Universe. May we too have the courage, faith and humility of this repentant thief as pray, Jesus, remember me when you come into your Kingdom.

The people stayed there before the cross watching Jesus. As for the leaders, they jeered at him. ‘He saved others,’ they said ‘let him save himself if he is the Christ of God, the Chosen One.’ The soldiers mocked him too, and when they approached to offer vinegar they said, ‘If you are the king of the Jews, save yourself.’ Above him there was an inscription: ‘This is the King of the Jews.’
One of the criminals hanging there abused him. ‘Are you not the Christ?’ he said. ‘Save yourself and us as well.’ But the other spoke up and rebuked him. ‘Have you no fear of God at all?’ he said. ‘You got the same sentence as he did, but in our case we deserved it: we are paying for what we did. But this man has done nothing wrong. Jesus,’ he said ‘remember me when you come into your kingdom.’ ‘Indeed, I promise you,’ he replied ‘today you will be with me in paradise.’

The tiny mustard seed and the yeast In the gospel last Sunday,...

The seed is the Word of God Jesus was a great story...

Come to me all you who are overburdened The main invitation that...

The challenge of being a follower of Jesus I share the following...

Do not be afraid Of what are you afraid? What fills you...

The Body and Blood of Jesus – Corpus Christi Separated though we...