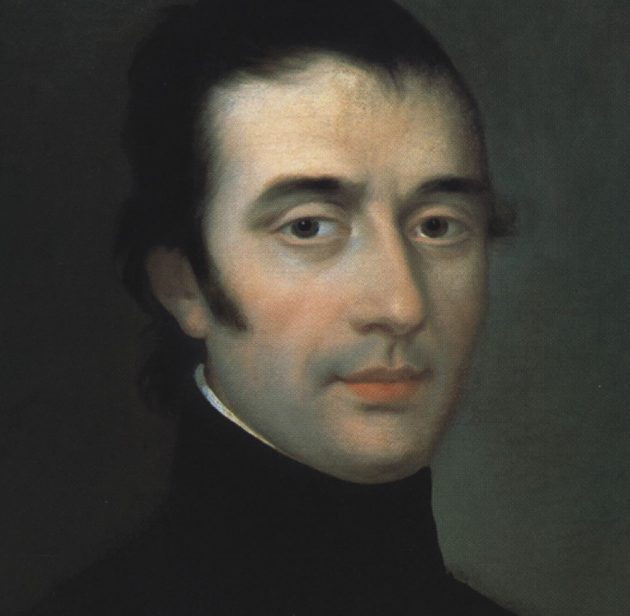 Check out these 10 reasons why you should get to know Saint Eugene de Mazenod.

1.) His life is an example of overcoming sinful inclinations.

From an early age, Saint Eugene de Mazenod struggled with his temper.

When he was four years old, his uncles took him to the theater where they sat in boxed seats. Below him, a ruckus broke out and disturbed his enjoyment of the show. He stood up and shouted down at those causing the disruption, “If I have to come down there!” The ringleader of the disturbance was so shocked by this that he ceased his actions, and the rest of the show was enjoyed in peace.

It was a lifelong struggle to control his temper. Despite his natural inclination to anger, Eugène managed to achieve holiness.

2.) He is the patron saint of dysfunctional families/families in crisis.

For this reason, he was declared the patron saint for families experiencing upheaval due to being refugees, divorce, or other reasons.

3.) He is a powerful example of not letting the tragic events of our lives define us.

When I first began to study Saint Eugène’s life for the purposes of writing a book about him, I intended my book to focus on his parents’ divorce. Yet, as I studied his life and writings, I found little about the divorce and how it affected Eugène.

Eventually, I realised his parents’ divorce did not define him, nor does the divorce of my own parents define me. This changed my perspective on the tragic circumstances of life.

We are not defined by the tragedies of our lives; we find our meaning in being a child of God.

4.) He reveals to us our inherent dignity.

“You are God’s children, the brothers of Jesus Christ, heirs to His eternal kingdom, chosen portion of His inheritance; you are, in the words of St. Peter, a holy nation, you are kings, you are priests, you are in some way Gods…”

Our identity can be found in the fact that we were created by God, and that gives us an inherent dignity.

5.) He encourages us to embrace suffering.

The above quote from Saint Eugène demonstrates his attitude towards suffering. He sought to unite the sorrow of his life to the Cross of Christ. To the Christian, suffering has meaning.

By uniting our sufferings to the Cross of Christ, we open ourselves to great graces.

6.) He reminds us to spread the Gospel and to do so in the best manner for the specific souls we are trying to reach.

“Leave nothing undared for the Kingdom of God.” – Saint Eugène

Saint Eugène became a priest because he wanted to reach out to the most abandoned in society because, in his words, “the truth must be known to all, all having an equal right to its possession.”

However, he did not simply preach the same to everyone.

When preaching to the poor of Aix-en-Provence, he spoke in Provençal, the language spoken by the people. When he went to the fish market in Marseilles to reach out to the wives of the fisherman, he spoke with them and matched their fast-paced wit and colorful language.

The way he spoke to people in terms they could easily understand endeared him to people and increased the success he had in evangelization.

7.) He teaches us the importance of obedience.

“If a man does not steep himself in obedience, he is good for nothing, whatever be his virtues.”

Saint Eugène’s warning above demonstrates how he felt about obedience. To him, it was of the utmost importance.

When following God’s will for his life, he wrote many letters to his mother (who did not want him to become a priest) stating how important it was to be obedient to God’s will. “When the divine Master calls me to Him to serve His Church, at a time when everyone abandons her, am I to resist His voice?” he wrote.

Moreover, when he was advised by the Vatican to stop defending himself from the illegal stripping of his French citizenship, he followed the orders of his superiors despite being told by two prominent lawyers his lawsuit would be successful. He believed that obedience to the Pope was integral to being a Catholic:

“Once you are a Catholic, you are no longer free to pick and choose. One must of necessity adopt the decisions of the one established to teach; and if there is schism, it is the party who is not with Peter who has gone astray. Such is my invariable manner of thought; I would not swerve from it, even were some decision handed down by this tribunal that goes against my own views.”

8.) He is a defender of religious freedom.

Following the French Revolution, the Church constantly had to fight off attempts by the government to infringe upon their rights. Eugène refused to be bullied by those in power.

The government once tried to force the Church to move a cross from the public square of Marseilles into one of the churches. He refused, declaring, “I would rather die than take part in such an apostasy.”

His brother bishops in France, after initially criticising his tactics of defending the Church, grew to respect Eugène and often sought his advice on how to stand up for the Church.

“It is morally impossible for a soul to make any progress in the ways of perfection if it lacks this tender and sincere devotion to the most holy Mother of God.”

Saint Eugene loved Mary and sought to imitate her obedience to the will of God throughout his life. As the founder of the Missionary Oblates of Mary Immaculate and Bishop of Marseilles, he taught his oblates and his flock to love Mary:

We never give too much honor to the Blessed Virgin provided devotion to her is understood and practiced in the limited sense of what is due to a creature, however great and sublime she may be.

Describing that day, he wrote, “My heart overflowed with Catholicism.” He even requested to be buried in the miter he wore that day.

Of him, the now-canonised saint said, “Eugène de Mazenod was one of those apostles who prepared the modern times, our times… His influence is not limited to the times in which he lived, but continues even in our time.”

This article was first published here and is reproduced with the permission of the author, Alex Rey, who is also author of the book Eugene de Mazenod, A saint for today.

Read more about St Eugene and the life the Missionary Oblates of Mary Immaculate here.

Morning Prayer with Mission with Youth

Today we join a group of young people and members of the...

The Art of Accompaniment