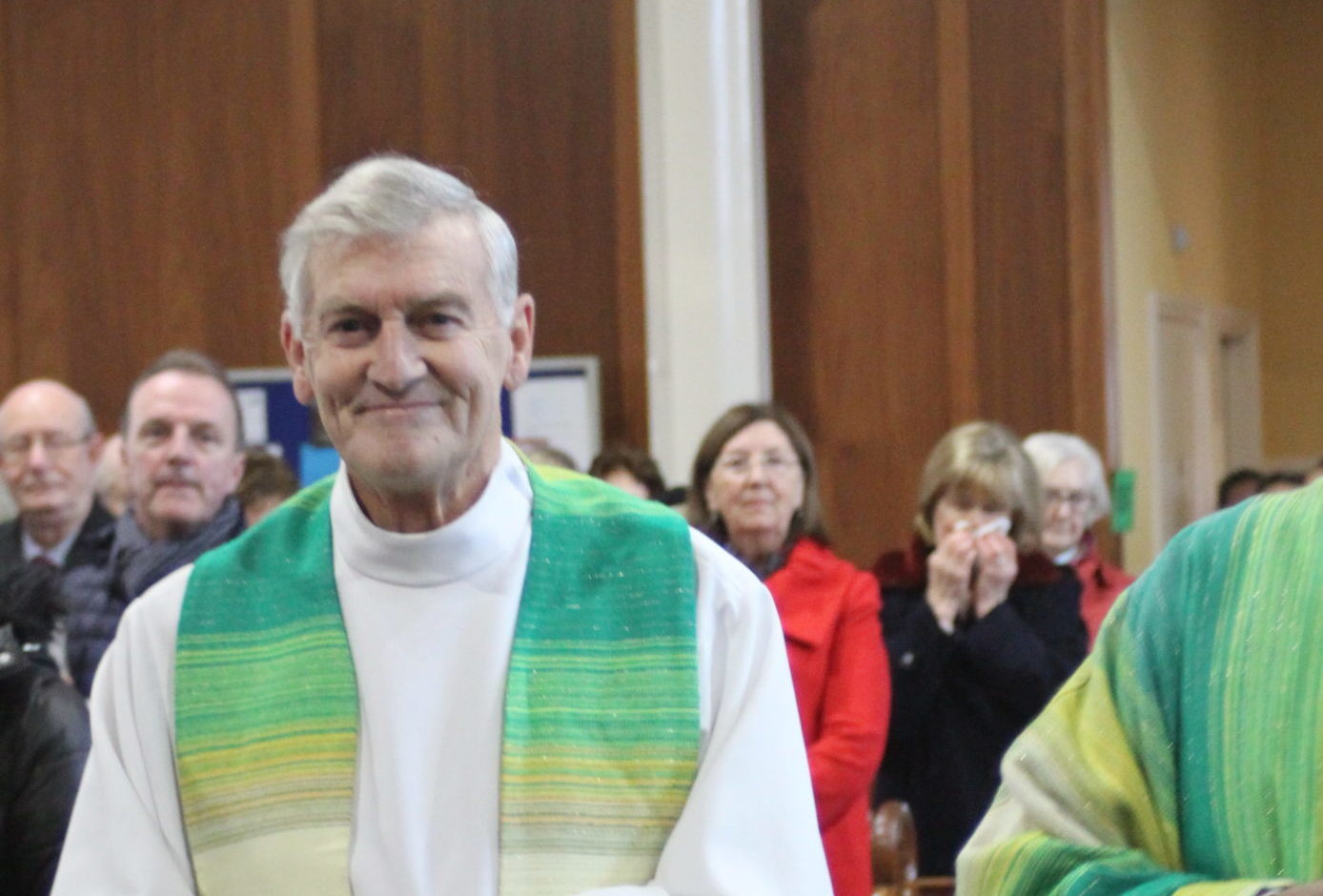 On Sunday November 11th, the parishioners of St Michael’s Parish Inchicore held a joy-filled and meaningful celebration of the Golden Jubilee Anniversary of Fr Louis McDermott OMI. Fr Leo Philomin, moderator of the Inchicore pastoral area was the main celebrant with Fr Louis at Family Mass at 11.30am. The Mass and celebrations following were attended by large numbers of parishioners.

Since ordination, Louis has served as pastor to parish communities in the England (Liverpool and Southampton) and Ireland (Darndale, and St Michael’s, Inchicore). He has also led a special project in Liverpool that worked very closely with poor communities in their struggles for justice and a better future. He was a member of the provincial administration for many years.

He is now pastor to the parish community of St Michael’s, Inchicore.

Below are a few words given by Helen Scott in tribute to Fr Louis and his time as pastor of St Michael’s:

Isn’t this a lovely morning to have a celebration, and what better occasion than this as we celebrate and give thanks for the 50th anniversary of Fr Louis’s ordination. Fr Louis was ordained in ’69 and it wasn’t until 2011 that he came here. It struck me that wasn’t in any great hurry to come to St Michael’s… Was he? All of you I’m sure agree that on our part his presence among us is truly a blessing. 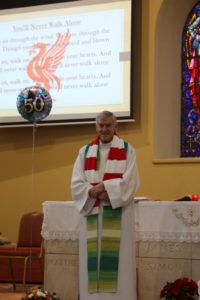 As far as I can remember our first introduction to Louis was on the Feast of the Epiphany (appropriately) but this I do remember: when giving his homily he said something like this is a lovely story but you know it mightn’t be factual just a story. There was a collective gasp from the congregation as much as to say who did they send to us this time!( I exaggerate) As we got to know him we understood that he was interlinking the gospel message into our daily lives and also I suppose challenging us to be open to new thinking, just as I think he is.

At the recent Jubilee Mass, Fr Willie, when speaking about Louis, said something like he lived on the edge. He wasn’t just referring to the days back when he wore the blue and navy for Dublin, because I don’t doubt he came to the attention of many a referee and played on the edge from time to time. The edge isn’t always the most comfortable of places. But from speaking to people who knew him down the years, I understand what was meant – Louis pushed boundaries and pioneered projects that would impact positively, and be relevant to people’s lives and communities. I don’t imagine he was ever too big on the rule book.

Many here and in the wider community have spoken about his kindness and sensitivity to them in difficult times, his almost daily visits to the sick times and his empathy to those bereaved… And it’s a measure of the man’s humility, and indeed his humanity, that we’ve often heard him say that he himself receives so much from others at these difficult times. Louis has a great sense of humour, loves a bit of fun – often self-deprecating.

But the hallmark of Louis’ ministry is his passion for Justice and his desire that the inherent worth and dignity of each person is recognised and valued. The words of the prophet Micah certainly run true in Louis’s case when he speaks of acting justly, loving tenderly and walking humbly. 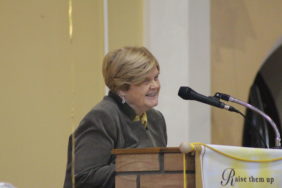 We thank you Louis for your 50 years of mission and service to the church: God’s people, which is challenging and I’m sure with its difficulties from time to time. May you be blessed with good health, love, joy, laughter and contentment. And may you have the wisdom, now that the drive for five has been achieved and celebrated; to understand that it might be someone else’s turn to lift Sam next year.

The following GIFTS represent the key landmarks on  Fr Louis’s journey as a priest. They were brought to the altar in gratitude to God for his life and work. Text by Pádraigín Clancy.

They are preceded by our Candle of Remembrance:

MERCY Sister – Bríde- carries forth  our first gift – the  candle of Remembrance. The light unites us with communities around the world who today are remembering all those who lost their lives at war. We think especially of those men who prayed here at St Michael’s before they departed  from Richmond Barracks  for war. 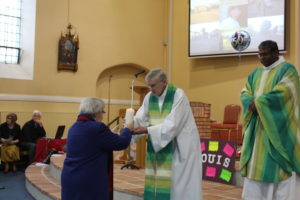 Parishioner, Mark Lawlor carries  Fr Louis’ Oblate cross to the altar. It is the cross Louis received on the occasion of his ordination 50 years ago in 1969. It reminds us of the brave step Louis took in faith in Jesus Christ  on that day. A step which has happily brought him here to us at St Michael’s. The cross has travelled with him over the 50 years (no doubt it could tell a few tales!). 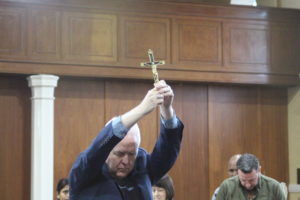 Paul Maguire (from our choir) – not an avid Liverpool supporter – in an act of deep humility – now carries forth a Liverpool scarf to the altar! Following his ordination, Fr Louis received his first obedience to Liverpool. He spent many years – two periods  altogether – working there, in communities that faced serious challenges. There he became no longer a Dublin only, player/supporter, but a Liverpool devotee too. 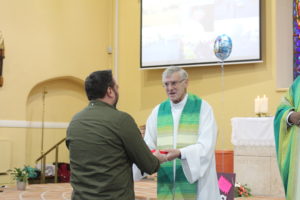 Pat Whelan – who has ably supported Fr Louis over the past eight years in the Parish office – carries forth a symbol representing Louis’ first obedience in Dublin which was at Darndale (where he spent 14 years and was part of the formation of that parish). It is a piece of cloth – woven by parishioner, Bríd Beggan. We chose the weave because its strands  represent the different aspects involved in community building – which is very dear to Louis’ heart and a central aim of his work. 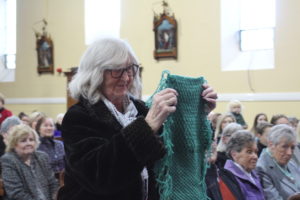 Parishioner Sumitha from India carries forth the emblem of the city of South Hampton in Britain. Before coming to St Michael’s, Louis’ obedience was to South Hampton where he spent 13 years. He came to love the community and the sunny weather of the south coast of England which he still misses – especially on a rainy grey day in Dublin. The emblem depicts an anchor and a rose. It was imagined  and drawn by a child and chosen by the people of South Hampton as their emblem. 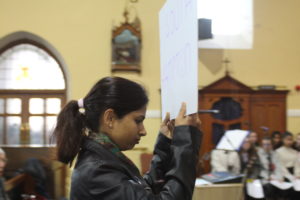 Parishioners Suzy and Francois from Mauritius carry forth the Hands of Friendship or cairdeas as we say in Irish. Friendship and hospitality are core values of our Christian faith community at St Michael’s. Fr Louis is one of the great exponents of this and he has shared the gift of friendship with many young and old in our community. This symbol is also  used in many of our liturgical celebrations here at St Michael’s including our First Holy Communion preparation masses. 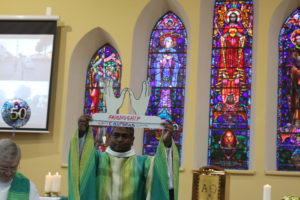 In Irish folklore we say there can be no festive occasion without festive music and festive food. Well we have the music and now, Mary O Connell  – representing all those volunteers in the parish who have assisted Louis  – carries forth our celebratory  cake. We look forward to sharing it with Louis later.

(It was lovingly made by Supervalue!) 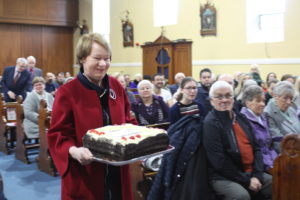 Finally, we are here, of course, because of our call to be in communion with Christ and one another. Pat and Terry, our longstanding sacristans, have lent great support to Louis over the years. They carry forth the Bread and Wine for our Eucharistic celebration. 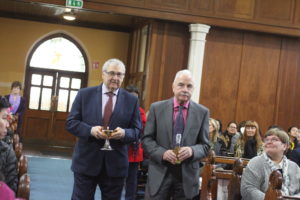 The children now bring forth their cards to Fr Louis. These are cards that say congratulations and thank you to Fr Louis and are coloured in by the children.

We hope that in years to come – when we are all long gone –  our children will have happy memories of today’s celebration.

Read about the Oblate Jubilee Celebrations 2019

The death has occured of Fr Eamon Reilly OMI