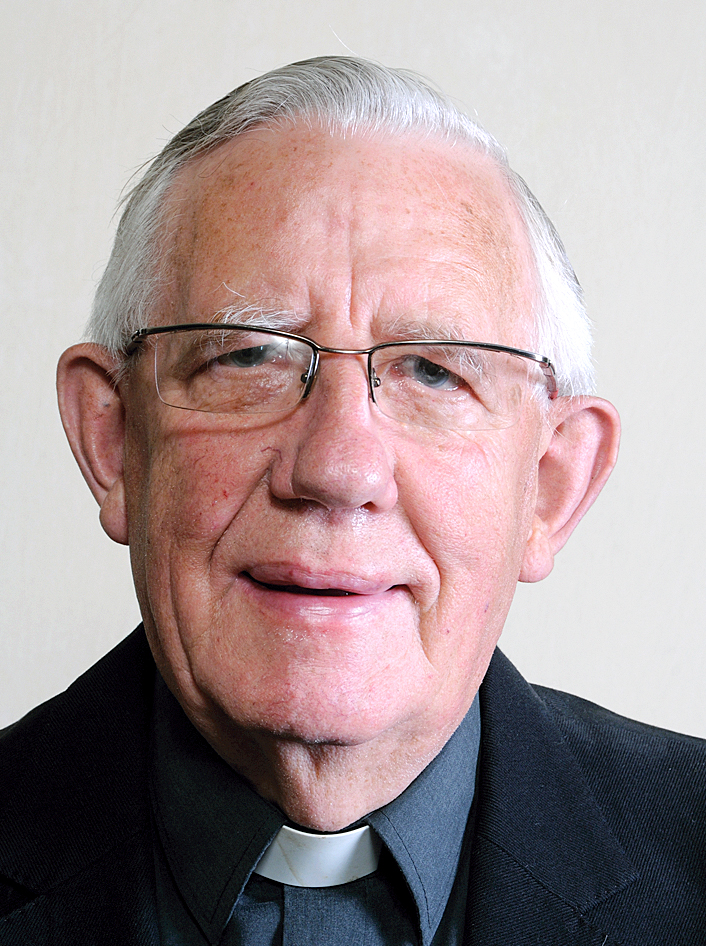 Tom Scully was born in Tullamore, Co. Offaly, on 19 May 1930. Second level education completed at Belcamp College, Dublin in June 1948, he entered the Oblate Novitiate that September. An excellent student, he studied philosophy at UCD, followed by theology at the Oblate Scholasticate in Co. Kilkenny, where he was ordained priest on 15 September 1955.

The following year he was assigned to Belcamp College, where he would teach mathematics for the next 13 years. His innovative game tactics and motivational coaching in football and hurling were greatly appreciated, not alone by players but by the whole school, as success on the sports field injected new life into the school experience.

A one-year teaching appointment at St Benedict’s College, Johannesburg (1969-’70) followed. He then returned to the Province to work as an Irish Emigrant Chaplain in England, first in Manchester (1970-’71), and then as director at Catholic Housing Aid, Birmingham (1971-’75). His next appointment was as pastor at St Peter’s Parish, Leigh-on-Sea (1975-’81). From 1981 to 1986, he was Parish Priest at Our Lady of the Wayside, Bluebell, Dublin. There followed a 5-year term as Director of the London Irish Centre (1986-’91). He then returned to St Peter’s Parish, Leigh-on-Sea as Parish Priest (1991-’97). Short appointments to St John Ogilvie Parish, Edinburgh (1988-’89), and St Michael’s Parish, Inchicore (1999-’01), were followed by a term as community superior at the House of Retreat Inchicore, where he continued to live in retirement until the end of his life.

Former Belcamp students remember Tom fondly as their teacher and coach for football and hurling, but especially for his kindness and consistent avoidance of criticism; how he encouraged and motivated them. He could lift his young players to the point where they could, and indeed did, overcome top class opposition.

I have included here a sample from the many messages coming in since his death:

‘… he was a huge influence in our lives who made our time in Belcamp special… a superb coach, friend and mentor… ‘

As a coach, he was ‘innovative on the field developing tactics that have been copied many times since. He encouraged us to play with style, which in retrospect may have been a little naïve, but it was certainly enjoyable’. He had ‘a huge influence on all of us. … as a coach, he was far ahead of his time’.

A young Oblate working with Tom in the late 1970’s recalls him summarising his team philosophy in the Latin phrase ‘Age quod agis’ (do well whatever you do).

Another young Oblate who worked with him in parish ministry in the UK and Ireland, remembers him as ‘kind, generous and great fun. … He was the first man to encourage me to go home for Christmas, for which I am grateful’.

In his earlier years of retirement, Tom worked tirelessly on the lawns and gardens, designing and laying out flower beds, getting his colours right…  here too his mathematical imagination was at work. Failing sight ended his gardening days, but he was buoyed up by visits from his former students. In their company he became young again and excited about how particular games were won or lost… and he shared in their joys and sorrows.

When a former Belcamp hurler/footballer and Kilkenny hurling star Frank Cummins, was inducted into the GAA Hall of Fame at Croke Park, a couple of years ago, he invited Tom to join him for the event. It was the highlight of Tom’s later years. Frank writes, ‘Like other students in Belcamp, I have fond memories of our time in Belcamp and his love of Gaelic games… he was a great motivator and coach to us students. It was my pleasure when Fr Tom accepted my invitation to join me… he was overjoyed to meet two fellow Offaly men, inducted the same day, Pauric Horan (hurling) and Matt Connor (football)’.

Fr Tom Scully has sadly passed to his eternal reward. His many achievements in life included coaching the Offaly Senior Football team which won the Leinster final and reached the All Ireland final in 1969. R.I.P. https://t.co/qSuUs6EiiR

Archive footage of a 1988 interview by @rte with Fr Tom Scully, who passed away this week.
Fr Tom coached Offaly to win a Leinster football title in 1969, and later worked tirelessly with the Irish community in London.https://t.co/bbbVRnfb8a