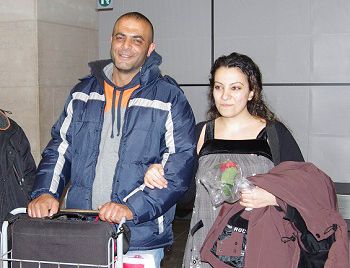 Fr. James FIORI tells of a special project undertaken by his parish in the capital of Canada.

Some months ago, even before the plight of the refugees had reached a fever pitch, someone at Canadian Martyrs Parish in Ottawa asked the question: “Can we and should we, as a parish, sponsor a refugee family?” A mini referendum was conducted. People were asked if they were in favour of sponsoring a refugee family. They were also invited to indicate how they saw themselves contributing to this undertaking: financial aid, providing furniture, clothing etc. The immediate response was incredibly positive.

A committee was formed to co-ordinate this project. In one of my Sunday homilies I reflected that this experience was truly an example of the miraculous. Not unlike the miraculous catch of fish, we have experienced the unfathomable presence of God in our midst. Ours is a very small parish and yet we had achieved our financial objectives within weeks, so much so that it was decided we would accept a second family. Our neighbouring parish, Sagrada Familia, joined our efforts in fundraising.

There has been an incredible sense of joy permeating this project. People are excited about reaching out to brothers and sisters who are struggling and in peril. During the Jubilee Year of Mercy we are encouraged to do the corporal and spiritual Works of Mercy. This project certainly was a prime example. I keep asking myself where the people learn these values. Clearly this is an Oblate parish and it would seem that the people have adopted many of the Oblate values and yes, the Oblate Charism. My Oblate predecessors certainly have effectively shared Oblate values. There is no doubt in my mind that this parish is both Oblate and missionary.

On February 2, I had the privilege of leading our Refugee Committee to the airport to receive our first refugee family, the Alkouries, a family of seven. On behalf of the entire parish family I welcomed them to Canada and to their new home. There are some things that don’t require words. We could see that in the faces of the family as they recognized the banner welcoming them in Arabic. They too could recognize the love and acceptance in our faces. They are refugees no more. The have come home. As we have told them so many times, “You are safe now.”

We welcomed our second family, a couple, on February 18 in a very similar way. There wasn’t the awe and wonder of faces of children, but nevertheless there was the deep gratitude that their exile was over and they too had come home.

The committee members have been busy and diligent getting the families settled. Most of the legal things have been accomplished – housing, bank accounts, medical, etc. The children are all enrolled in school and the adults have begun their language classes. It appears they are doing well. We have had two receptions for them at the parish. People have been very authentic in welcoming them to our community. It was only once they arrived that we became aware that they are not only Christian but also Catholic. They are members of the Melkite Rite. It is indeed a bonus that we can join together at Eucharist to give thanks to God. We thank God for allowing us the privilege of manifesting the mercy of God by welcoming them into our lives and hearts. They are our brothers and sisters who have suffered much and lost everything. No doubt they too are thankful that God heard their cries for help.

I think this is what it means to be an Oblate Parish. I have never been more proud to be a Missionary Oblate of Mary Immaculate.

The death has occurred of Fr. Anthony (Tony) Carroll O.M.I. The death...

Join Fr Eduardo for this morning’s prayer and reflection on today’s reading...